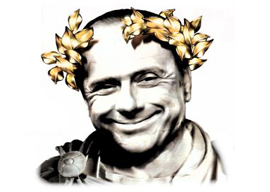 The Italians are obsessed with bidets. They dismiss as dirty the people of any country that does not provide bidets in every bathroom, whether public or private. As a Briton who lives in their midst, I believe it is not simply because sodomy is so popular with straight Italian couples. Italians use the bidet not only to cleanse their bodies but also their souls. The bidet is a bit like the confessional. It may not absolve sins like a priest, but it kind of washes them away. Like so much else in Italy, the confession booth included, the bidet encourages but does not deter sin.

You would think that in a country so mired in corruption, the Italian state would have little time to waste on prosecuting the innocent. You would be wrong. In Italy, criminal investigations are run by prosecuting judges who spend much of their time hounding the innocent on the grounds that everyone is guilty of something.

These judges have terrifying powers. They can lock you in jail for up to a year on suspicion that you have committed a crime without charging you while they search for evidence. And if they do not find such evidence, hey, no problem, either. They can charge you on the grounds that you must have committed the crime, and an Italian court will often condemn you for the same reason. Worse, their mission is often red (as in “communist”) justice, hence their nickname Le Toghe Rosse (The Red Togas).

Silvio Berlusconi, the media tycoon and former prime minister, is their most high-profile innocent victim. I deliberately use the word “innocent” because unlike Italians, I believe in a principle sacred to any sane society: Everyone is innocent until proven guilty. In Italy, it is the other way around.

“Unlike Italians, I believe in a principle sacred to any sane society: Everyone is innocent until proven guilty. In Italy, it is the other way around.”

Berlusconi, despite what you no doubt believe, has not once been convicted of a crime. He has only ever been convicted “in primo grado”, never “in definitivo”, because either he won on appeal or the case ran out of time. In Italy, you can appeal a conviction twice and until the process is over, your conviction is not definitive. It is nearly 20 years since Silvio il Magnifico, as I call him, became a politician and prime minister for the first of three times and ever since he has been on trial virtually nonstop. Once an Italian”especially a high-profile one”is under investigation, he or she is then tried in piazza.

You probably think that George Zimmerman stands no chance of a fair trial because the American media have already found him guilty of Trayvon Martin’s murder. What the black civil-rights movement and their PC media buddies have done to Zimmerman is playground stuff compared to what Italy’s “red” judges and their PC media buddies do to Italians such as Berlusconi day in and day out.

Rupert Murdoch’s media empire has been rocked to the core by charges of bugging people’s homes and offices, tapping their mobile telephones, and publishing the results. Italy’s tabloid judges do the same thing but on an industrial scale. They bug hundreds of thousands of telephone calls a year and leak the juiciest ones to the press, which then publishes them verbatim. And it is all entirely legal, apparently.

So in Italy, once someone is defined as an indagato (under investigation), the judges have carte blanche to destroy his life and reputation during the subsequent months or years before he even becomes an imputato (charged with an offense) let alone is put on trial. The rights to know and publish everything and to spread zizzania (malicious gossip) are sacred. They trump the rights to a fair trial and privacy.

Such grotesque contempt of court, as we British call it, would kill any prosecution stone dead immediately in any normal country and lead to the prosecution of those responsible. If Italy had such a law, the only trials to make it to court would be those of contemptuous judges and journalists.

This week, the latest Berlusconi trial“the so-called bunga bunga trial“fruit of “round-the-clock judicial intrusion into the private life of Italy’s former prime minister, reconvened in Milan for a couple of days before being adjourned yet again as is the Italian way. In this trial, Il Cavaliere (The Knight), as he is called by the majority of Italians who voted him in as prime minister so many times, is accused of inciting an underage girl to prostitute herself and of having sex with her on dates unknown during 2010 at the regular late-night parties he hosts at his villa near Milan.