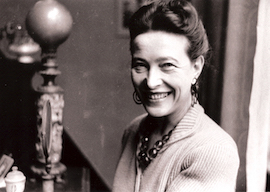 NEW YORK—A strange thing happened to me last week here in the Bagel. Having read the review of Susan Sontag’s biography in The Spectator’s pages, my plan was to compare hers with that of Simone de Beauvoir—an opus about Paris, Simone, and the Left Bank après la guerre that I had just finished. My money was on Simone, an extremely promiscuous and beautiful woman who was the first to raise the feminine flag against men’s oppression of the fairer sex. Simone’s The Second Sex made her lots and lots of enemies, but also established her as the No. 1 female icon at the time. Basically she wrote that men confined women to the role of the OTHER while they remained the SUBJECT. When her second volume came out in 1949, there was hell to pay. Even the great François Mauriac wrote a note to her assistant saying that now “I know everything there is to know about your boss’ vagina.”

Simone had gone into detail about the two ways a woman can reach climax, via the clitoris or via the vagina. Many deemed the book obscene, but it sold like hot cakes and established Simone as an even greater icon than she already was. I thought Sontag had nothing on Simone, perhaps because I found her lower half quite ugly, although certainly not the face. Basically I didn’t like Sontag’s three gods: success, money, and fame. Then Jimmy Toback, who knew her intimately, came for dinner and switched me around. Sontag viewed morality, personality—reality itself—as tenuous and perpetually fluctuating approximations. Sontag announced that morality is only a form of acting, another sound bite that sounds hollow after a minute’s thought.

Still, she was not the ogre I had made her out to be in my mind, but what I really regret is not having met Simone on a Parisian night when she went out hunting.

“What I really regret is not having met Simone on a Parisian night when she went out hunting.”

Now outraged feminists are using the unacceptable behavior of lots of men in the past in order to achieve equality in the workplace and at home. So far so good. But not all men are Harvey Weinsteins, and I am obliged to defend some rather unpopular men against what appear to be flimsy or false allegations of sexual abuse. In the recent case of the TV newsman Matt Lauer, an adult woman voluntarily participated in a long-term consensual relationship with a man she claims had raped her. Ditto with an actress who claimed Weinstein had raped her again, two weeks later in the same room. (Plausible but with a huge credibility problem.)

The French, needless to say, have throughout their history treated the fairer sex with gallantry, the beautiful Catherine Deneuve among the first to call for a halt to excessive man-hate. A couple of weeks ago a French court ordered a female journalist, Sandra Muller, to pay 15,000 euros in damages to Eric Brion for “surpassing the acceptable limits of freedom of expression, as her comments descended into a personal attack.” La Muller went on social media and exposed him as a pig. He was a pig because the first time he met her he said she had big breasts and that she was his type. Brion was hardly a gentleman, but was his approach some kind of harassment or verbal rape? Hardly, says the Solomon-like judge Taki. In America he would have been given a couple of years, but the French were wiser. Women in the land of cheese claim the #MeToo movement has created a totalitarian climate by publicly prosecuting private experiences. As the non-gentlemanly Brion said, “You can’t destroy a man’s life just because one evening he spoke to you inappropriately without going any further.”

You can in America and in Britain. In these two countries, men are accused of being part of a rape culture merely for being men. Books by both sexes and of course ghastly Hollywood are not helping. Excavations by writers into the history of manhood and its propensity for violence are a dime a dozen. Tiny black women now beat up enormously large white men in movies and on TV, while unread books fill bookstores with memoirs of rape and examinations of masculinity, race, and sexuality in which men confess to horrors. The self-recriminations are for profit—what else?—but they’re also a safety valve. What I miss most, of course, is American girls, the way they used to be: bright, clever, sweet, full of energy, resourceful, blond, beautiful, and with perfect teeth at an age when few people flossed. But that was long ago. Now we have screeching, high-pitched voices with hard looks, horrible noses, and ugliness à la Harvey Weinstein, God rest his soul.