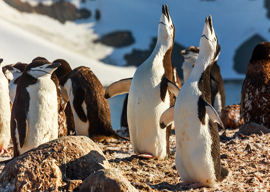 I have too much respect for music to sing myself, as my voice is such that it makes the average crow sound like Fischer-Dieskau. It is not that I am tone-deaf; on the contrary, I am appalled by the tuneless croaking sound I make when forced to try. Many a time when asked in remote places to sing a song from my homeland I have had to claim severe illness of the throat as an excuse not to comply with the request. I am no songbird.

There are many types of singing that I abominate, for example spontaneous drunken singing that breaks out like an epidemic rash in bars or pubs, or that of student fraternities, which always seems to me a possible or likely prelude to violence. Karaoke is another kind of singing that strikes me as horrible. In many cases, I suspect, the person who takes to the floor dreams or fantasizes that he or she will be noticed by a talent spotter and be whisked into the glamorous, or at least tinselly, world of show business. There is a kind of social contract (much more real than Rousseau’s) at karaoke events: You listen to and applaud my pathetic efforts, and I’ll listen to and applaud yours.

Perhaps the most bizarre karaoke session that I have ever attended was in Dili, the capital of East Timor, then under Indonesian occupation. The atmosphere in the small city was eerily reminiscent of that of the capital of an Eastern European communist country, although the Indonesians were supposed to be fiercely anti-communist. A grayness and deadness covered it like a pall—not surprising, in view of the mass killings that the Indonesian colonialist army had carried, and were carrying, out.

“A man with too consistent a view of the world may prefer to preserve his view than acknowledge the messiness of reality.”

The bar of the main hotel in Dili was filled with Indonesian officers relaxing after a hard day’s genocide. I was at the time the only nonmilitary guest of the hotel. The officers drank and sang karaoke, and the commanding officer came over to me to ask whether I had any requests for a song that one of his men could sing. It was no doubt his attempt at being friendly; merciless murderousness does not abolish Man’s need for sociability. By all accounts, the killers in the Rwandan genocide sang communally around fires after they had spent their days chasing their neighbors and killing them with machetes. Music truly does have charms to soothe the savage breast, it seems.

My thoughts and recollections of community singing, karaoke, etc., were stimulated by a paper in the most recent edition of The British Journal of Psychiatry, which related an experiment in which women suffering from postpartum depression were “treated” (if that is quite the word for it) with community singing, to discover whether it hastened their recovery. Many women suffer a degree of depression after giving birth, and in a few cases it can be very severe. I remember one case when I was a young doctor in which the mother (a very nice and intelligent woman) drowned her newborn baby in the access of her despair. That baby would now have been 40 years old and the mother approaching 70, if she were not more than 70. The law, of course, held her not responsible, and quite rightly so; but what greater punishment could it in any case have inflicted than having to live for the rest of her life in the remembrance of what she had done? With the passage of time I am sure she was able to put it to the back of her mind and carry on as normal; and yet I am equally sure that it was always there, in the background, ever waiting to leap again into the foreground. The law forgave her, but I doubt she could ever forgive herself.

This puts me in mind of the late Thomas Szasz, the professor of psychiatry who denied the reality of psychiatric illness. He was a marvelous man, a brilliant writer and polemicist, erudite and very charming. You could disagree with him, but you (or at least I) couldn’t dislike him.

He held that psychiatric illness was true illness if there was demonstrable physical pathology; otherwise to call it illness was to employ a metaphor. It was pseudo-illness only, and the purpose of the metaphor was to turn doctors into agents of state control of the behavior of its citizens, a kind of medicalized policeman.