Six Hours With a Hasid 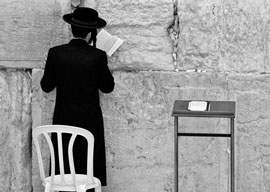 Though Malaysia Airlines flights have a tendency to get lost, American Airlines is infinitely reliable, and the business class on their new A319s feels like you”re sitting in God’s vagina. Unfortunately, it also means you have to sit with someone else. This can be a deal breaker if you”re stuck with someone who talks too much, reeks of body odor, or even worse, wears lots of perfume. I was worried about all of these when a little man in a yarmulke and sidelocks sat down next to me.

“It’s OK,” he said awkwardly. He was a Hasidic Jew and I know how this goes. I have lived among this strange sect all of my adult life. He’s either going to talk like a homeschooled child and ask me a million boring questions or glower and stare straight ahead as he reeks up the entire plane. Hasidim often smell as bad as extremist Muslims. I”ve often said that rather than dwell on their differences, they should focus on what they share”namely, body odor and misogyny.

“He all but admitted that the Holocaust was the best thing that ever happened to the Hasidic movement.”

I asked him if he could open the window shade as we took off because I like to watch the plane leave the ground. “It’s the only interesting part of the flight,” I added. It had never occurred to him to watch, because he comes from a culture where curiosity equals death. He told me he’s a performer and showed me a long list of Google hits on his iPhone. Turns out this guy was of the Chatty Cathy variety.

I was going to tell him how little of a shit I give about his life, but confrontation that early in the game can make for a very tense trip, so I went for a much more diplomatic response. “That’s not how conversations go,” I said in a patronizing tone while pushing his phone out of my face. “You keep it light and talk about external stuff. Then maybe, way later we ask what the other guy does. Introducing yourself comes at the very end of the flight, if at all.” He nodded like a Martian who was still learning Earth’s ways and turned away. Before I could enjoy the silence, he turned back and said, “I may do this because I am insecure and I feel you are thinking I am just like all Hasidim, so I go out of my way to say this is not the case.” I told him we”re cool and began to check out the entertainment system while he began texting friends about what had just happened.

After several beers and two movies that were too terrible to finish, I decided to engage my little friend. “You know what?” I said as he scrolled up and down conversations on his phone. “You were right. I was thinking, “Oh great” when I saw you sit down. I do have a negative view of Hasidim, but it’s based on personal experience. I”m not prejudiced. I”m postjudiced.”

He nodded. “I know,” he said. “That’s why I did it but you”re right. It was the wrong way to do this thing.” He showed me the conversation he was having about it on his phone. Turns out, this guy has drifted from orthodoxy and is doing wild shit such as not living in Williamsburg and not growing his beard as long as it could be. This is a very stressful existence for them, so he has a support group of like-minded friends and they all text each other every time they get confused. “The Internet has been very helpful to us,” he said of his situation, “but it’s also overwhelming. We are not educated. We don”t know these things so when we see all this information at once, it makes you sick. You get a headache.”

I had a pretty good buzz going on at this point and decided to let it all hang out. “Do you get money from Israel?” I asked. “I think a lot of goyim resent the fact that we send so much money to Israel and they send it back to you.”

“The Jews in Israel hate us and many here hate them back,” he replied. Apparently, moving to the Holy Land before the Messiah arrives is bad form. It’s like opening your presents on December 24th, or in their case, celebrating Christmas at all. A lot of anti-Semitism is based on the assumption that Jews are a unified front, but talking to this guy made the entire religion sound more fractured than the skinhead scene of the 80s.