Six Omens for the New Year 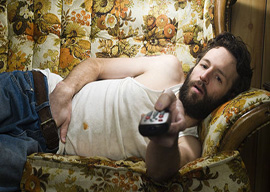 So the apocalypse didn”t quite happen last year. It’s good news for some, but perhaps not as good as we think. This world has changed immensely in the past fifty years. Here are six signs that maybe the Mayans were more right than we know.

1. Everyone is a bum. As late as the mid-1980s people were not slobs. Certainly there were plenty of them, especially remnants of the hippies, but by and large people were proud not to appear homeless.

People once went to auto races and baseball games dressed well. Even poor people wore cufflinks. It was not considered onerous to iron your clothes. This all sounds incredible now.

“I have no qualms with the fact that things change; I would merely like to see them begin changing for the better.”

In 1975 a man was a heathen if he didn”t wear a suit to church. By 1995 you were effete if you did. Some while ago I was in a cathedral built by my ancestor and out of an entire congregation only the priest and I wore a suit. I hear it is the same for weddings, with denim now common.

Disgraceful. It is a mark of respect to God to look your best for a service in his honor and I”m not sure I want any part of a heaven that accepts derelicts. Even Jesus bathed before heading up to Jerusalem.

2. Jesus became a Jew. Without delving into the morass of this religious and historical debate with attendant rhetoric, it may come as a surprise to anyone under fifty that for the majority of people until around 1960 Jesus Christ was not considered to be a Jew as understood today.

He was a Galilean in Judea, which meant something different to congregations. But according to almost all modern denominations he was Jewish. Whether for good or ill, this was a radical transition in thinking of the world’s Christian populations.

3. People are proud to be stupid. While the number enrolled in higher education has increased dramatically, students are more stupid than ever. Most have little to no interest in subjects outside their intended careers. This may be immaterial (though I do not concede it) in terms of Euclidean geometry or classical poetry, but it’s intolerable concerning history and politics.

Over 25% of people have not read a book the past year. They claim they don”t have time, which is odd because the typical American watches approximately five hours of television a day.

Worse, viewers consume the “History“ Channel, which features programs on ghosts and UFOs, or the “Learning“ Channel which has as its marquee star a morbidly obese little girl and her mentally deficient relatives. Many people would be content to trade places with imbecilic exhibitionists if it meant the same paycheck, no matter the loss of dignity.