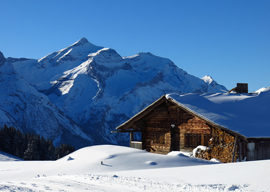 What I miss most up here in the Alps are the literary lunches conducted on the fly with writers like Bill Buckley, Alistair Horne, Natasha Stewart, occasionally Dmitri Nabokov, and, yes, movie star and memoirist par excellence David Niven. This was back in the late ’60s and throughout the ’70s, during the winter months and in between ski runs. Bill would ring early in the morning and suggest a run somewhere, then he’d pick an inn in the vicinity where we’d meet David and Natasha, two nonskiers, and that was it. Buckley always referred to me as Führer—once on the slopes, of course—as I would go down first followed by him and Alistair Horne, the two not always steady on their skis, and at times more out of than in control. Once safely down, the fun began.

Natasha wrote for The New Yorker, back then a well-written weekly and not the race- and transgender-obsessed lefty vehicle of today, and her main gripe was the editing. She would not permit “an iota to be changed,” a fact that made me envy her as if she were Ava Gardner, back then an obsession. I was then writing for National Review, Bill’s baby, and I had been told that my stuff was heavily edited, the second-most in the magazine, after a German intellectual with a double-barreled name. Bill had suggested I go to school again and learn proper English usage, or try to learn by listening to the sound of good English. I immediately chose the second option.

“Back then one skied better and faster after drinking.”

Alistair Horne preferred to talk about history, as he was a historian, and always went back to the Greek civil war of 1946 to 1949. “Taahki, you should try that, you already know so much about it,” he’d sweetly suggest to me as the first bottle of white wine was opened. Then he’d clamp up and look nervous as hell if the word “Chile” came up. He was about to start his history of the fall of Allende after the skiing, and it made him terribly depressed. The book was a success, and I loved the title: Small Earthquake in Chile. Alistair always got that way before the start of one of his books, but skiing and wine and talk of women helped him unwind.

The mysterious Dmitri Nabokov was among the best-looking men ever. He was the only son of the great Vladimir, and a close friend of the Buckleys, as were his parents, who lived 45 minutes away in Montreux. Dmitri was an opera singer, a race-car driver, and a novelist, but one who wrote under a pseudonym that none of us ever got to discover. One of the games I played with him was to announce that I had found out under whose name he wrote, and blurt out “Romain Gary” or, if drunk, “Grace Metalious,” the best-selling woman who wrote Peyton Place. I got almost hit for that one.

David Niven would tell us stories about Hollywood, thus when his eventual great best-seller The Moon’s a Balloon was published, the joke among us was not to waste any time even opening it, we had heard every single story, sometimes more than once. When my first book, The Greek Upheaval, was published in the U.K. by Tom Stacey and in the U.S. by a publisher who went broke almost immediately, the bookstore on Gstaad’s main street—yes, there was a bookstore, long before it became a luxury-goods store frequented by high-class hookers—showcased it, and my moment of triumph had arrived. In fact, the book with my name on its cover was in the middle, shadowed between one by Bill Buckley and a best-seller predicting the crash of Communism by 1979. (Close but no cigar, as Communism collapsed in 1989, but what’s ten years where oracles are concerned?)