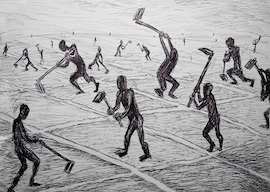 “America was born of sin.” So goes the broken-record preachifyin’ of the racial evangelists of the left. And that sin is (drum roll) racism. Just Google “racist origin of,” “racist roots of,” or “racist history of,” and you’ll get page after page of search results in which leftists teach you the racist beginnings of, well, everything: the Second Amendment, juries, minimum wage, circus clowns, tipping at a restaurant, the phrases “tipping point,” “peanut gallery,” and “long time no see,” table manners, breakfast, the SATs, psychology, hospitality, diets, banking, the suburbs, cartoons, math, Wonder Bread, the prom, and even religion.

Last month, The New York Times went all-in on born of sin, declaring that every single thing about the U.S. is a direct result of slavery. Take sugar, for example. Your affection for candy bars is racist. Sure, today’s sugar is not the product of slavery. But because it used to be a really long time ago, the mark of (sugar) Cain has forever branded your malted balls. Even your sweet tooth is racist, the Times reasons, because if not for the slaves behind the initial mass production of sugar in the Americas, we might be perfectly content today sucking on lemons and eating a flavorless mush called rootmarm.

Be not fooled; there is method (or just meth) to the Times’ madness. With most of the Democrat presidential candidates going gaga over slavery reparations, the purpose of the NYT piece is to prime the rest of us to accept reparations as just and necessary. The formula is simple: Slavery “made” us, so therefore we owe penance because everything we have is built upon a foundation of racist evil.

I love a good irony, and here’s a doozy: The reparations movement itself is built upon a foundation of racist evil. Quite literally, from the creation of the formal reparations movement in the mid–20th century through the early 2000s when influential Democrats began to openly embrace the idea, there’s a through-line of racial hatred, courtesy of the man who is credited with putting the entire matter on the map…and on the Democrats’ agenda.

Introducing Robert Brock. Or “Dr. Brock,” as he preferred to be called. Let’s open the Brock file with a few words from the left-leaning, pro-reparations newspapers Democrats know and trust. Back in 1990, the L.A. Times plainly stated that Brock is “revered as the elder statesman” of the reparations movement:

For the better part of his adult life, Brock has been campaigning in churches, community centers and colleges for an idea whose time, he says, is overdue: reparations for the descendants of the captive Africans who helped build the nation…. The son of a politically astute Houston stevedore who came to Los Angeles in 1945, the itinerant Brock said he first became interested in reparations while attending Southwestern University School of Law during the early 1950s.

Brock began his pro-reparations activism in 1956.

Although Brock is regarded as one of the leading reparations figures—and perhaps its most vociferous—the cause has now been embraced by activists in Detroit, New York and Washington, where the National Coalition of Blacks for Reparations is based. “I don’t know if I’ll live to see reparations for black people,” Brock said, “but I’ve been laying the foundation. Sooner or later, we are going to get what this country owes us.”

That was the L.A. Times in 1990. The New York Times championed Brock’s activities in 1994, reporting that he’d “filed suit against the Internal Revenue Service seeking tax exemptions on behalf of 49 million descendants of slaves on the grounds of involuntary servitude” (the Ninth Circuit would eventually hand Brock a defeat, much like the one that killed a different reparations suit he brought against the U.S. government in 1965).

“Now that the reparations issue has become the darling hot button of Democrats like Kamala Harris and Elizabeth Warren, Brock’s past has been conveniently ‘blackwashed.’”

The Washington Post profiled Brock in 2000, describing him as “a legal activist who for decades has been barnstorming the country spreading the word on reparations,” adding, “The people eagerly awaiting Brock’s message can hardly be called radicals. They labor on farms, in factories and at store counters, united in their belief that nothing shaped their often dour circumstances so much as the nation’s history of slavery and racial discrimination.”

The Samuel DuBois Cook Center on Social Equity at Duke University credits Brock as the founder of the reparations movement.

In November 2000, the American Bar Association Journal featured a glowing cover story about Brock’s efforts, calling him a leading reparations lobbyist who “heads a growing movement that may be the key to the nation’s search for racial harmony.” That same year, C-SPAN covered Brock’s appearance at a Capitol Hill rally for reparations. Speaking at the event along with Brock was Rep. Tony Hall, Democrat of Ohio. Hall pledged his support for slavery “restitution.” Hall’s work in the early 2000s (including his formal resolution demanding that the U.S. apologize for slavery) formed the basis of current congressional reparations proposals.

So there you have it. Robert Brock—“revered elder statesman” of reparations. A “founder” and a “leading and most vociferous” reparations figure who “headed” the movement while standing shoulder to shoulder with the Democrat congressmen who made the issue a priority.

Brock is the author (under the pen name “Ben Weintraub”) and publisher (under his own name) of the 1995 book The Holocaust Dogma of Judaism: Keystone of the New World Order, which asserts, among other things, that the Protocols of the Elders of Zion is an authentic document detailing the Jewish plan for world domination, that “communist-alien Jewish doctors working through the World Health Organization of the United Nations manufactured AIDS from a sheep virus and deliberately injected it into the prison homosexual population,” that Jews survive by “roasting enemies and getting power by drinking their blood,” and that the Holocaust is a myth conjured up by Jewish “Satanic magic.”

Now, I know what you’re thinking. “C’mon, Dave…only a freak like you would know of such obscure literary sputum. Mainstream journalists and politicos were probably unaware of Brock’s hatemongering.”

Wrong you are, oh cocksure imaginary reader. On Dec. 14, 1987, The New York Times detailed Brock’s racial extremism, describing his support for and association with the Aryan Nations organization, and his desire to use the reparations money to fund a black ethnostate alongside the Aryan Nations’ white ethnostate.

Did I say 1987? Yes, I did. The Times hid Brock’s Aryan Nations affiliation when it championed his reparations efforts in the 1994 article I quoted earlier. Ditto The Washington Post. In 1988 the Post exposed Brock as a “California black separatist” who organized a Washington, D.C., meeting featuring neo-Nazis. That was before the Post’s 2000 piece, which presented Brock as nothing more than a dedicated if eccentric reparations activist.

The underwear skidmark known as the SPLC began reporting on Brock’s anti-Jewish activities in 2001…but now that the reparations issue has become the darling hot button of Democrats like Kamala Harris and Elizabeth Warren, Brock’s past has been conveniently “blackwashed.” Just three weeks ago, the SPLC’s Justin Ward defended Brock’s reparations demands, omitting any mention of the racism the SPLC had earlier documented. Indeed, Ward suggested that Brock’s critics are the racists!

Allow me to belabor that point. The New York Times, the WaPo, and the SPLC had all done stories on Brock’s anti-Jewish activities…and all three later went on to write positively about Brock in pro-reparations pieces, as if the history they’d previously exposed didn’t exist.

My favorite irony? Though Democrats falsely claim that President Trump has never denounced David Duke, in 1994 Robert Brock—the man who laid the foundation for their beloved reparations scheme—praised David Duke in a far-right newspaper!

As if it needs saying, Brock’s views on race and Jews were well-known by the time Democrat rep Hall appeared alongside him in D.C.

And as the “legendary” proponent of “racial healing” was attacking Jews and praising Aryan ethnostaters, he was ruthlessly fleecing his fellow blacks. He’d hold reparations “seminars” in black neighborhoods, charging the gullible and often impoverished marks $50 each to file reparations “claims” in their name (here’s the sign-up page from Brock’s now-defunct website). Juan Williams detailed this scam in his 2006 book Enough: The Phony Leaders, Dead-End Movements, and Culture of Failure That Are Undermining Black America—and What We Can Do About It, writing “As crazy as all that seemed, Brock got 165,000 people to hand over fifty dollars before the government caught up with him.”

That’s $8,250,000 that the “father of the reparations movement” scammed from the black community. Lord knows how much he got from moronic white nationalists looking to support his “ethnostate” plan.

For the record, I knew Robert Brock. In January 1992, he approached me to videotape a “Holocaust revisionist conference” he was planning to hold in South Central L.A. (the fringe has always been my briar patch, so if it’s freakish, political, and it was around in the 1990s, I probably had it on the bottom of my shoe at some point). Brock offered me a few hundred bucks, and while I’ll gladly relieve a bad man of his money, I’ll never give him even a minute of my time. So I took the dough and sent my coked-up gangbanger high school friend to videotape the event (which dissolved into a near riot).

Here, for the first time anywhere, is some of that footage…the elder statesman of reparations decrying Jews as “punks” and “slave masters” who are the “perpetrators of the greatest crimes” against blacks.

According to leftists, if there is “racism” in the history of a thing, that thing is tainted, no matter the good intentions of those who are associated with that thing in the present. “Feel free to enjoy that candy bar, but first own up to the racist history of sugar.” Robert Brock influenced the history of the reparations movement in the U.S. Even the newspapers that know his ugly history acknowledge his footprint. Reparations advocates like Cory Booker, Kamala Harris, Elizabeth Warren, and Julián Castro need to set an example and show the rest of us how that “owning up to racist history” thing is done.

If we’re expected to eat our candy bars with a solemn, mournful understanding of the history of sugar, the least the reparations “progressives” can do is acknowledge the racist history of the man who “laid the foundation” upon which they now stand.

So I’ll be waiting for the pro-reparations candidates to denounce Robert Brock.