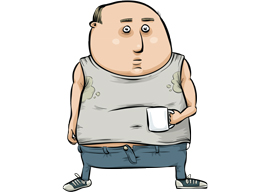 Beyond the fact that clothes are now mass-produced rather than made individually, there is an act of will involved. Practically everyone now dresses not merely in a casual way, but with studied slovenliness for fear of being thought elegant, as elegance is a metonym for undemocratic sentiment or belief. You can dress as expensively as you like, indeed expensive scruffiness is a form of chic, but on no account must you dress with taste and discrimination. To do so might be to draw hostile attention to yourself. Who on Earth do you think you are to dress like that?

“The problem is not merely absence of self-respect, it is active hostility to self-respect, replaced entirely by self-esteem.”

While seized of the paradox in Amsterdam, I looked in the windows of many clothes shops in search of elegance; I found it in not one. The dÃ©cor of the shops in many cases was in good enough taste, but their wares, cheap or expensive, were uniformly tatty, in some cases literally so, for the vogue for pricey torn jeans has not yet entirely passed. Is it not odd that in an age when more people have a large discretionary income than ever before, and are prepared to pay thousands for such adornments as tattooing (some one in five American adults are now tattooed), almost everyone should look as if he or she had just rolled out of bed and picked up a pile of clothes from the night before that was lying crumpled on the floor?

Among males in Amsterdam, only taxi drivers and other relatively humble servants of the public wear ties. If you are smart, you are subordinate: you will never get anywhere in life. This is more than fashion; it is ideology, or at the very least a gestalt switch.

Dress is one of the matters”in truth, they are not very many”on which I have changed my mind, and not just because I have matured as I have grown older, but because general conditions have changed. In my youth, I considered concern with dress as frivolous and evidence of a superficial mind. To be concerned with dress was surely not only vanity but evidence of a propensity to judge by appearances, though by what else in most cases we have to judge I did not enquire of myself too closely. It did not occur to me that it is not to judge by appearances that is foolish; it is to judge irrevocably and solely by appearances that is so.

Anyway, in my youth I thought that scruffiness was next to godliness, or at least to high intelligence. And indeed many highly intelligent people in those days did appear to be somewhat shabby, for example wearing tweed jackets that were out at elbow, with flecks of smoked pipe tobacco. From the fact that highly intelligent people were often scruffy, I drew the logically incorrect inference that scruffy people were intelligent, so I joined the legions of the tatty (though never of the dirty).

There is one very obvious advantage of slovenliness over elegance: the latter requires effort and attention to maintain. Scruffiness is more akin to a state of nature, and requires no such effort to maintain. But there is more than mere laziness in the modern trend, something that lies deeper. For the modern scruffiness does not arise from clothes that have worn out or that people have not bothered to maintain; they are designedly scruffy.