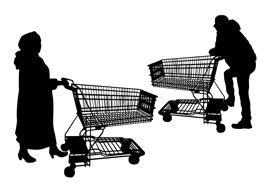 Among the measures demanded of Greece by its creditors in return for yet another pretense that its debt is actually performing and therefore does not have to be written off, I noticed that for Sunday trading, Greece’s stores and shops must henceforth be open, or allowed to open, on Sunday. From this I concluded that at the moment such trading is forbidden in Greece, as it is in Germany, in fact. I have not noticed that the prohibition has had too devastating an effect on the latter’s prosperity.

At the same time that shops and stores must be allowed to open, anything that they sell will be subject to 23 percent value-added tax, hardly an incentive to buyers and almost as exorbitant an imposition as that of auction houses that sell paintings. Besides, the problem for Greeks is not that they do not have enough opportunities to buy, it is that they do not have the money with which to buy. Are they supposed to be extended credit in order to buy on Sunday what they cannot afford? My mother had a book, celebrated in its day, by a man called Gayelord Hauser: Eat and Grow Beautiful. Sunday trading seems to suggest to the Greeks that they should Borrow and Grow Rich.

“What kind of person spends hours choosing what he could buy in about a minute with no discernible difference to the aesthetic outcome?”

In Britain, there is an organization called the Lord’s Day Observance Society that campaigns for Sundays to be set apart from the other days of the week, and though I do not share its religious preoccupations, I am in sympathy with its aims. Surely, people can go one day a week without feverish activity. The man who does not know how to do nothing seldom knows how to do anything.

Let me be honest and reveal my prejudices: Whenever I see the crowds shopping on Sundays, or on any other day, for that matter, I wonder what on earth they are shopping for. The sight never fails to depress me. Either they already have everything they need, or they can”t afford anything more. What is it that they are seeking? Happiness through a pair of shoes, contentment through a pair of jeans? They wander down the shopping streets looking like carnivorous sheep, lost but ready to attack.

They are not even very good at shopping, to judge by the things they buy and already wear. In fact, they buy the same things over and over again”for example, pairs of jeans. They supposedly see differences in them, if only in the names of the brands attached to them. Talk about the narcissism of small differences! And small isn”t the word for it.

Go down any shopping street in any Western country and count the proportion of elegantly dressed people. You will be lucky if it is one in a hundred. Everyone else will look like a slob or a slattern (someone ought to write a musical”not Guys and Dolls, but Slobs and Slatterns). There are worse things than to be badly dressed, I suppose, but to be badly dressed and to spend a large portion of one’s spare time choosing the clothes in which to be badly dressed”well, it has taken the age we live in to promote such a bizarre and perverse mass phenomenon. What kind of person spends hours choosing what he could buy in about a minute with no discernible difference to the aesthetic outcome?

I hate buying clothes, and I know perfectly well that you can”t make a silk purse out of a sow’s ear. No amount of dressing up will turn me into a matinee idol. Still, if I want a tie it takes me about a minute at most to spot one that is smart and even elegant.