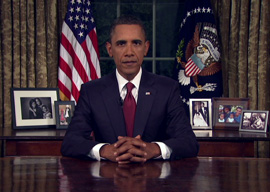 Obama is pulling American troops out of Afghanistan. Or at least he says he is. He also said that American forces in Iraq are no longer there. Officially, the Iraq war is over, at least if you ignore the fighting. So where are the 45,000 soldiers based in Iraq if not in, well, Iraq?

According to a Brookings Institution report from late May, they’re in…Iraq.

Will the administration pull a similar act of verbal prestidigitation to keep troops in Afghanistan, given that they are the only barrier between Hamid Karzai’s unpopular government and the Taliban? If you read the press, Obama is heading for the exit:

USA Today, June 22:
“President Obama heralded the beginning of the end of the nation’s 10-year war in Afghanistan on Wednesday….”

The Obama plan for Afghanistan, which may succumb to delays similar to the Iraqi pullout, calls for 33,000 soldiers to depart by September next year with the rest withdrawn at the end of 2014. If you believe that will happen on schedule, send me a check for $100 and I’ll sell you a new Rolls-Royce.

“Obama is taking the advice that LBJ ignored, but with a twist: He is declaring both victory and withdrawal without achieving either.”

Only a few antiwar groups and media critics have pointed out the obvious: Since he became president, the Nobel Peace Prize winner has tripled the number of US troops in Afghanistan. From 34,000 soldiers in theater when he assumed office, he raised the total to 100,000 by 2010. Last year was also the one in which the cost of Afghan combat rose above that in Iraq.

Fairness & Accuracy in Reporting pointed out that with 100,000 troops and another 100,000 security contractors (whom Karzai is seeking to expel) in Afghanistan, “it’s hard to read a phased pullout of 30,000 out of 200,000 over the course of an entire year as a ‘rapid’ withdrawal.” This excludes 80,000 to 90,000 support troops in nearby countries. Yet if the media prove willing to describe such a mild pullback as a “withdrawal,” American voters may accept that the war in Afghanistan, like that in Iraq, is over. It won’t matter that the locals go on killing one another and American troops stand by to intervene when necessary.