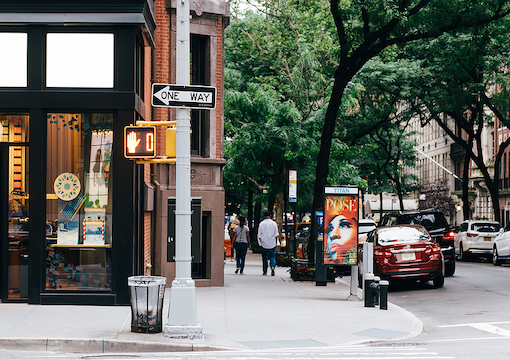 NEW YORK—A couple more weeks in the Bagel and then on to dear old London. I’ve had a very good time partying with young friends here, but the place reeks, literally as well as metaphorically. Violence is creeping up, gangs shooting at each other even on 59th Street and Fifth Avenue, right where the poor little Greek boy grew up. Where a commemorative plaque of young Taki’s residence should have been put up long ago for services to American women, there was a corpse. Next day it was forgotten, as an 11-year-old was gunned down in the Bronx.

What used to be extreme radicalism is now the reigning ideology of every major American city. Speech patterns have changed, and words are now perceived not in the way they were intended; everything is politicized and crime rates have gone through the you-know-what. Racial and political differences egged on by the internet threaten major cities in the U.S., as contempt for the police and American institutions in general has become the default stance of the ruling elite. I’ve never seen it this bad, even during the height of the Vietnam conflict, when Black Panthers were openly shooting at cops and Hollywood and the left were rooting for them. Now it’s much worse, and only Rupert Murdoch’s newspapers and TV network stand between total chaos and some semblance of the past.

“Only Rupert Murdoch’s newspapers and TV network stand between total chaos and some semblance of the past.”

And speaking of Rupert Murdoch, his Fox News is the most popular cable network by far, something the left simply cannot abide. So what do they do? They openly fabricate and associate his commentators with any crime du jour, as in the recent outrage in Buffalo, where an 18-year-old white madman gunned down 10 black people and three whites after immersing himself in racist content easily found in internet forums.

Not content with innuendo and libelous hints, subversive know-nothings employed by the Bagel Times then quote some obscure left-wing professor who blames a Fox star commentator like Tucker Carlson for inflaming the killer moron. Mind you, when the black equivalent of the white moron attacked and killed something like 15 white Christmas marchers in Wisconsin late last year, he was described by the lefty media as being momentarily mentally impaired. So I ask you, what do you think the white 18-year-old was when he killed 10 black people in cold blood, Albert Einstein?

About ten years or so ago, before he became a star at Fox, I had lunch with Tucker Carlson and we exchanged numbers, but have never communicated since. I found him to be a very polite and well-informed young man, with good manners, something that is almost unheard-of among American journalists. At present the Bagel Times is running book-length stories about him, singling him out as the prime mover behind the great replacement theory, which claims that sinister elites, especially Jews, are deliberately bringing in immigrants to displace white Americans. The theory had its origins in France, when Renaud Camus used it as the title of his book back in 2012. When the so-called white supremacists used the slogan in Charlottesville, Va.—where a young Taki went to university and where no plaque commemorating that event is to be found—Tucker Carlson did not have a nightly program at Fox, so the hysterics linking him by Bagel Times ignoramuses are wrong. What is worse, however, is what lies behind the organized attack against him:

At a very chic dinner party last week, a lady lamented what would happen if 90-year-old Rupert were no longer around. I assured her that he was in excellent health and that there is more of where he comes from that will continue his legacy. Which is why the left in America is trying desperately to silence Fox, The Wall Street Journal, and the N.Y. Post. Link Murdoch’s media to white supremacists and replacement theory and—abracadabra—you have the excuse for discrediting his media empire. Link Tucker Carlson with the Buffalo madman and—abracadabra—Carlson is toast. The fact that the madman’s 180-page manifesto doesn’t mention Tucker is irrelevant. As is the truth, where the left is concerned.

What is more interesting, and far sadder, is the fact that 30 people in Philadelphia and 27 in New York were shot on the day that 13 died in Buffalo. But it was all black-on-black crime, hence not in the equation of discrediting Fox & Co. The fact that Schumer, the senator from New York, a man who would sell his own mother for publicity, and deliver her also, tried to tie Tucker Carlson to the Buffalo case illustrates the depth of Democratic corruption and dishonesty. These so-called elites really take the rest of us for less than numbskulls, dunderheads who believe the tale that slaves sold by Arabs built the wonder that once was America. There is something warped about the left’s vitriolic attacks on truth and refusal of facts. Bile and malice against whites do not alter the fact that 13 percent of the population commits 55 percent of the crimes. Nor does it alter the fact that whites will be in the minority in the U.S. by the year 2050. Is it a wonder, then, that some American citizens believe that there is a conspiracy to replace them? There is no conspiracy, but when a Bagel Times editor, Sarah Jeong, calls for the disappearance of white men and is cheered by fellow clowns at the paper, some whites feel justified to worry.