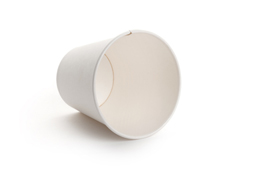 The other day I behaved badly for once: not very badly (I should hardly have confessed to that), but still worse than I like to think that I normally behave.

It was in a busy railway station. I was more than an hour early for my train and, now acutely (and chronically) aware of the fast declining time left to me, I was unwilling to fritter that hour away. I wanted a place to work, and gone are the days of spacious and silent waiting rooms: every corner of the station had now been commercialized, thus proving the truth of King Lear’s great dictum that nothing will come of nothing. If I wanted to work I should have to sit at a cafÃ©, and I did not have the gall to sit there without buying something. I asked for an espresso.

“Do you mind it in a paper cup?” the nice person behind the counter asked me. To judge from her looks and accent, she was Polish. In England, we have 5 million unemployed, but we still need Poles and others to serve in cafÃ©s and restaurants (God preserve us from English waiters).

“I do mind,” I said tetchily. I abominate paper cups, which seem to me to epitomize lack of savoir vivre.

“I was particularly mortified by my own behavior because I had seen my father behave like this”actually much worse than this”and I had vowed never to follow suit.”

“The problem,” said the very nice Pole, “is that our dishwasher is broken, and it is company policy that, when the dishwasher doesn”t work, we can”t use china cups.”

“Your company policy ought to be to have a working dishwasher, then,” I said grumpily.

Of course, I knew that I was behaving badly as I did so. The poor young woman was trying to be nice; it was not her fault that the dishwasher wasn”t working. I was reacting like a spoiled brat, bullying someone who was not in a position to retaliate.

I was particularly mortified by my own behavior because I had seen my father behave like this”actually much worse than this”and I had vowed never to follow suit. Not only had he complained about trivia and lost his temper over them, but he had seemed perpetually to be on the lookout for things to irritate him. He enjoyed being irritated and making others feel small. A bad example, when taken in the right way, is a good example. And here I was behaving just like him, though perhaps in a minor key.

Then again, some time ago in Manhattan I observed a businessman bullying some Peruvian servers in a cafÃ© because they had made a small mistake in his order. (Not that it could have mattered aesthetically: everything in this cafÃ© was equally ersatz and disgusting.) He ranted at the poor Peruvians, who of course could not answer him back. I wanted to intervene and tell him to stop behaving like a swine, but I didn”t dare: he would have turned on me and he was so aggressive that I thought he might actually become violent. I merely raised my eyebrows to the Peruvians to let them know that I sympathized with them. God knows how difficult and tiring their daily lives must have been. Later I resolved not to let such a scene happen in front of me unremarked, even if it meant being stabbed to death.

Feeling distinctly uneasy over how I had behaved, and not able, therefore, to concentrate on my work, I went over to the young Polish woman during a short lull (I noticed that she was very busy and worked very hard, which made her good humor all the more meritorious) to apologize to her. It seemed important to me to do so, not that she might think the better of me”that hardly mattered, for in all likelihood we should never meet again”but that she should think the better of humanity. The customer being always right is a very good commercial slogan, but a very bad moral principle; and there is no better way of turning someone into a misanthrope, I suspect, than to confront him or her with spoilt and petulant people who complain bitterly over trivia, or over nothing much.