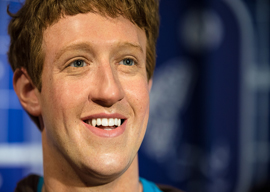 Your lips better get used to mouthing that name. The King of Facebook has been traveling across the country, visiting quaint locals, quietly laying the groundwork for a future political run.

Zuck isn”t stupid. He saw the effect social media had in landing Donald Trump in the White House. While all the hullabaloo over “fake news” was overblown, Facebook helped break the media stranglehold by making Trump’s popularity more visible.

The individualized algorithm that emphasized personal news curation did exactly what it was supposed to do: It gave extra attention to stories users wanted to read, confirming priors and supporting bias.

If you believed Hillary Clinton was a cadaver of a candidate, liable to overheat and pass out on any given temperate day, the things you read on Facebook only confirmed your conviction.

“For all of Facebook’s illuminating potential, it has regressed into a void of cat videos and shock-and-click headlines.”

Immediately following the election, Zuckerberg denied that his social-media giant helped direct the outcome. But a few months later, he came clean with his larger vision for Facebook. “My hope is that more of us will commit our energy to building the long term social infrastructure to bring humanity together,” he wrote in a mini-manifesto. To bring his vision to life, Zuckerberg announced the hiring of 3,000 more employees to police postings for unacceptable material. And just this month, Facebook promised to do a better job suppressing sites “that contain little substantive content and have a large number of disruptive, shocking or malicious ads,” to better cultivate an “informed community.”

On its face, the new model sounds good, right? For a private entity, Facebook is armed with enormous power. The platform, by virtue of its mammoth user base, has the ability to alter the perception of millions. An assurance that Zuckerberg and his execs will use their tool only for truth and the public good should be welcome.

Except it’s not. The vacuous language Zuck and his cronies use to justify their new model is too tepid to be trustworthy. It is corporate speech, the very same dialect used by companies the world over to deflect attention from more nefarious goals.

The rampant anti-Trump bias in Silicon Valley should raise a big red flag for tech CEOs” motivations. In an interview with The New York Times, Evan Williams, founder of Twitter and cofounder of the writing platform Blogger, lamented his role in fostering insta-communication between people.

“I thought once everybody could speak freely and exchange information and ideas, the world is automatically going to be a better place. I was wrong about that,” he told the paper. Williams hates that the internet caters to the lowest common denominator. When he was reminded that President Trump credited Twitter with helping elect him to the Oval Office, Williams turned distraught. “It’s a very bad thing, Twitter’s role in that. If it’s true that he wouldn”t be president if it weren”t for Twitter, then yeah, I”m sorry.”

What’s Williams sorry for? That his creation performed as designed?

Thanks to social media, enough Americans were willing to take a chance on Donald Trump because they realized they weren”t alone in their support. The system worked exactly how it was supposed to, with voters casting ballots after feeding at the digital trough for news.

So why is Silicon Valley reeling from Trump’s victory? Why is the people’s choice so despised by his enablers?