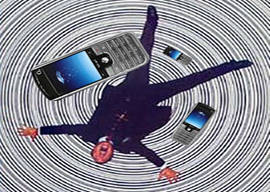 Nomophobia, or “no-mobile-phobia,” sounds as stupid as luposlipaphobia. At least the latter”the fear of being chased by wolves on slick kitchen linoleum while wearing socks”is meant to be a joke.

Since mid-February, over a hundred news stories have popped up to warn the public: “Nomophobia is on the rise,” “66% of population suffers from nomophobia,” “Do you fear being without your cell phone? You might have nomophobia.” Even NPR ran a brief story with no trace of irony. This ridiculous meme originated with a poll of 1,000 people in the UK conducted by SecurEnvoy, a digital password company, in which two-thirds of respondents said they freak out at the thought of losing their cell phones. Most of these news stories are mindless parrot pieces repeating a dull joke with no punchline, but a few actually recommend seeking professional help if symptoms are severe. I guess that’s the punchline.

As opposed to the dwindling minority of normal people who would just go on with their lives, nomophobics melt down when they misplace their cell phones, drain their phone battery, or merely imagine getting disconnected from hundreds of their closest friends. Nomophobics experience the usual symptoms of fortitude deficiency, including panic attacks, shortness of breath, dizziness, trembling, sweating, accelerated heart rate, chest pain, nausea, and the tremulous voice of a lily-livered cyborg who anticipates a power outage. Treatments include calmly visualizing being without a cell phone, “exposure therapies” such as spending small amounts of time away from the phone, or even medication if necessary. I suggest cyanide.

“Most people are afraid to lose their cell phones, but they should probably be more afraid to have them.”

Of course, this is incredibly silly”but certainly true. It may be a stretch to cite one statistic that claims 66.6% of the population, but plenty of people feel they can’t live without their cell phones. These days, your communication device is your window to the world”a critical lifeline to friends, family, and business contacts. Your whole life is stored in there, and who wants to lose their whole life? But if you put all of your social eggs in the tech basket and are too lazy to write those names, addresses, and phone numbers down, then you deserve to be isolated from the universe and I hope your cell phone falls in the toilet.

Fringe fundamentalists have spent the last few decades spinning high-tech paranoid fantasies. A tyrannical Antichrist is supposed to tag the masses with microchips to track our every move”even monitor our very thoughts. That’s all nonsense, of course. No one is being forcibly tagged and tracked. Instead, consumers line up in droves to pay hundreds of dollars for their own personal number of the Beast”complete with email, Google, and Facebook. Every communication, Web search, online obsession, and personal connection is recorded, cataloged, and stored for future use by market analysts, government agencies, and to some extent, Facebook stalkers. What I wouldn’t give to know what Google or DHS know about us. Once you have probed a person’s deepest fears and desires, it’s easy to bait the stick with the most effective carrot.