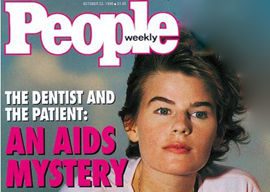 As I’m sure you’ve heard, two black dudes went into a Starbucks last week and claimed a table without ordering anything. And then they (yes, apparently both of them at the same time) decided to use the bathroom. Because that’s what guys do in coffee shops with tiny one-toilet bathrooms—they go in together to watch each other piss.

After refusing the bathroom bruthas their bonding ritual, and after asking them to order something or relinquish their table (which they refused to do), the Starbucks manager called the cops, and a legend was born. The bathroom boys are now national heroes, their story told far and wide. After days of noisy protests and breathless media coverage, Starbucks CEO Kevin Johnson has not only apologized to the toilet twins, he’s also promised to close every Starbucks in the U.S. for one day next month so that the employees can be sent to diversity reeducation camp, where I’m assuming one of the lessons will be that there’s nothing at all odd about two grown men in sweatpants walking into a coffee shop without ordering anything and demanding to jointly go to the bathroom.

It’s a joke of a story, and here’s the joke-within-the-joke: Several prominent black activists are now protesting Starbucks’ capitulation to their protests because among the organizations brought in by the coffee giant for its Ludovico Technique reconditioning seminars is everyone’s favorite collection of farbissiners, the Anti-Defamation League. Women’s March co-chair and Louis Farrakhan fangirl Tamika Mallory has condemned the ADL’s inclusion in the brainwashing sessions because, according to her, the ADL is “constantly attacking black and brown people.” Professional brown person Linda Sarsour is also protesting the ADL’s presence in the coffee klatch.

“What stood out to me about The Lavender Scare wasn’t the subject, but the producer-director, Josh Howard.”

Here’s why this is so damn funny: The ADL is one of the most smear-happy organizations in the world. Those lovable nebbishes never pass up an opportunity to defame a perceived foe. And now they’re the ones being smeared, because no, they are absolutely not “constantly attacking black and brown people.” The ADL does indeed counter Jew-haters of color like Farrakhan. But if you’re going to bring in the big guns to browbeat your employees over “diversity,” the ADL has as much of a right as the NAACP to man the specula and administer the eye drops.

As the ADL finds itself being compared to the KKK, I shed no tears for an organization that has made a cottage industry out of comparing people to the KKK. But I’m fascinated by the dynamics at play whenever the roles of smearer and smearee are reversed. And while the ADL/Starbucks controversy is garnering a fair amount of press, a lesser-known but perhaps more interesting example of smear reversal is playing itself out on movie screens across the country. The Lavender Scare is a documentary film that’s currently burning up the festival scene. The movie tells the story of the Eisenhower-era mass firing of gays from federal jobs. That policy was based on a belief that gay men in high-level government positions were a security risk because they could be easily blackmailed and thus manipulated by a foreign power…and while that was not a completely baseless assumption, it can be argued that any straight male employee with a mistress posed a similar risk.

Whatever the motivation for the firings, the fact is a lot of decent folks lost their livelihoods based not on any specific wrongdoing on their part, but rather their sexual preference. It was an ugly episode in our history, and certainly an appropriate topic for a documentary. But what stood out to me about the movie wasn’t the subject, but the producer-director, Josh Howard. Ring a bell? Probably not, but you’ll likely know him by reputation if not by name.

Josh Howard was the 60 Minutes producer who got the boot for his role in the 2004 George W. Bush National Guard hoax. CBS had claimed to have in its possession documents that proved ol’ W. had spent his time in the National Guard eating caviar in a Houston whorehouse while being fellated by Miss Texas (or something to that effect). 60 Minutes II’s Dan Rather rushed the story to air without properly authenticating the documents (all the while assuring his audience that the docs had been thoroughly vetted), because it was two months before the election and dangit John Kerry needed the boost. The scam was exposed when keen-eyed viewers noticed that the “1973” documents had the image of Clippy the Microsoft paper clip in the upper corner (or something to that effect), and producer Howard was forced to resign. That should have killed his career. But no, like Jason in the Friday the 13th franchise, Howard came back, lionized in the 2015 Robert Redford megaflop Truth, which argued that the real villains in the CBS scandal were the evil right-wingers who pointed out the obvious flaws in the forged documents.

When Truth proved both a critical and box office dud, you’d think that would have finally ended Josh Howard for good. Guess again. Like genital herpes, he’s resurfaced, racking up awards at festivals.

Howard’s role in “Rathergate” is not what’s going to damn him to hell. The Bush forgery hoax was standard partisan hackery. The right does that crap too (Andrew Breitbart didn’t wait to see the rest of the video before condemning USDA cog Shirley Sherrod as a racist). No, here’s what should haunt Josh Howard, and here’s what makes his festival wins so ironic.

Kimberly Bergalis was only 19 years old when she was infected with HIV by her dentist, a gay petri-dish-in-scrubs named Dr. David Acer. It was the late 1980s, and Acer was dying of AIDS. Somehow (and there’s still no consensus on exactly how it happened) Acer managed to infect six of his patients with the disease (he was either the world’s most sloppy and incompetent dentist, or, as some have speculated, he was a serial killer). His victims ranged from an 11-year-old girl to a 65-year-old retired schoolteacher. When Kim Bergalis realized she was dying, she did the unthinkable. Rather than forgive her gay murderer and join the fight against antigay “bigotry,” she became a leader in the movement to protect people from HIV-positive health-care workers who might, even inadvertently, spread the disease to their patients.

Bad show, Kimberly. Totally the way not to have Elton John dedicate a song to you.

Bergalis already had two strikes against her in the eyes of gay activists: She was white and Christian. When, prior to her death in December 1991, she was able to shepherd a bunch of commonsense patient-protection reforms through Congress, she became, to LGBT groups, the worst Hitler in the history of Hitlers. Punishment had to be meted out.

Of course, you can’t AIDS-kill someone twice. But you can piss on their memory once they’re six feet under. And that’s where Josh Howard (who, for the record, is gay) came in. In 1994 he produced a now-discredited segment of 60 Minutes that falsely painted Bergalis as a lying whore. Howard, along with anchor Mike Wallace (full disclosure: I am far from neutral regarding Mike Wallace. His treatment of me on 60 Minutes in January 1994 was such that to this day I still travel to Tisbury, Mass., once a year to piss on his grave), slut-shamed not only young Ms. Bergalis, but the 65-year-old retired schoolmarm as well. They claimed, falsely, that Ms. Bergalis was an oversexed tramp (in fact, she was still a virgin at the time of her infection), and they claimed that the old lady must have gotten AIDS from an affair she had (Howard didn’t mention that the affair had occurred fifteen years earlier, in the 1970s). When The Washington Post reminded Howard that Bergalis’ boyfriend had tested negative for HIV and thus could not have been the source of infection even if they had been sexually active, Howard snidely replied, “Who knows how many boyfriends she had?”