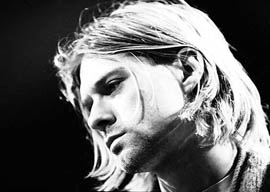 It’s been 20 years since Nirvana’s Nevermind album and its breakthrough single, “Smells Like Teen Spirit,” were released. The scrawny corpse of Kurt Cobain, the Man Who Refused to Be Marketed, is being repackaged and remarketed, with Nevermind now reissued in multiple commemorative editions of escalating cost and pointlessness.

As with everything Cobain-related, the predictable slop-puddle of fawning encomiums and immature ejaculations have squirted forth from the bespectacled, beta-male rock critics that Kurt, in his quest to forever change the music industry, neglected to slay. For two decades running, she-men who look like this have tossed the most absurdly hyperbolic verbal hosannas at the incurably self-pitying junkie as if he actually had redeeming personal qualities. Michael Calderone (pictured in the far left of that lineup), without a trace of irony, once wrote that “Kurt Cobain’s suicide was our generation’s Kennedy assassination.” Gil Kaufman (second from left) equated Cobain’s suicide with “the Challenger and Columbia Space Shuttle explosions, the riots following the Rodney King verdict, [and] the September 11, 2001 terror attacks….”

In language usually reserved for the likes of Jesus Christ and Gandhi, we are reassured of Cobain’s “significance,” his “importance,” his “idealism and truth and…honor,” and how Nevermind “spoke to a generation” and “changed the world.” Oh—and unlike Axl Rose, who until Cobain’s advent was the world’s biggest rock star, Kurt “didn’t bait blacks and gays.” (Axl Rose hated blacks so much, he only allowed half a black dude in his band.)

“What’s debatable is whether his effect on pop culture is worth celebrating.”

It’s not as if Cobain didn’t leave a huge mark—Nirvana has sold over 50 million albums, and in 2006 Cobain temporarily eclipsed Elvis Presley for the coveted crown of being the world’s highest-earning dead celebrity. What’s debatable is whether his effect on pop culture is worth celebrating.

Seemingly within hours of Nevermind’s release, all the poodle-haired, spandex-constricted 1980s glam bands were jobless. The hairspray and shampoo industries suffered tremendous losses, offset by the instantaneous resurrection of the flannel-shirt and thrift-store sectors. Whereas rock songs had focused on hot chicks with large breasts, lyrical themes shifted to depressed twits with sunken chests. Unkempt junkies yarled and warbled and yowled about heroin, depression, and how they were depressed they couldn’t find more heroin. Somehow, this all gave “new life” to rock music.

Cobain, with his endless tut-tutting and pooh-poohing of “racism, sexism, and homophobia,” was the John the Baptist of Emasculated White Pop Icons. Forevermore, it would be only testosterone-addled, tattoo-spackled, buffed-out, Glock-toting black hip-hop stars—or the occasional white guy from Detroit wearing cultural blackface—who were tasked with peddling racism, sexism, and homophobia through pop music.

What influenced this towheaded product of misty Aberdeen, WA, to become so influential? It appears that the most formative experience of Cobain’s youth was his parents’ divorce when he was nine. His broken family broke his spirit, allegedly causing the budding bard of bummed-out lyrics to scrawl on his bedroom wall:

I hate mom
I hate Dad
Dad hates Mom
Mom hates Dad
It simply makes you want to be so sad.

In 1993, Cobain told an interviewer, “I desperately wanted to have the classic, you know, typical family. Mother, father. I wanted that security, so I resented my parents for quite a few years because of that.”

Such situations typically present two options: You can spend your life trying to heal the wounds, or you can keep wounding yourself and pretend that it’s pretty.