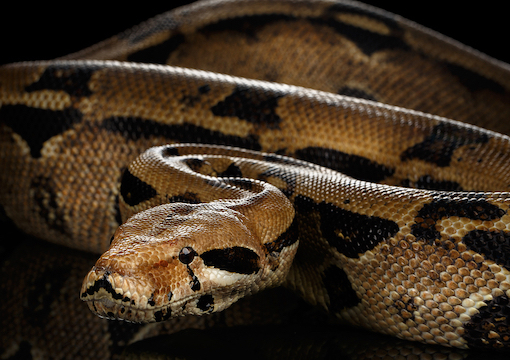 A woman in Indiana was recently found asphyxiated to death by a snake—a reticulated python—still wrapped round her neck. This was a death so horrible that you avert your mind from imagining it too closely.

In England two years ago a young man was found strangled to death with his pet python coiled beneath a nearby chair, as if trying to disavow its responsibility for the death or complacently surveying its handiwork (it is difficult to tell with a snake).

Both the killer pythons were eight feet long, less than a third as long as their maximum length.

I first became aware of the subculture of keeping such reptiles more than forty years ago when I had a patient who kept a boa in his flat that had grown so large that he was now afraid to return to it. He claimed that it had been the perfect pet for him because his job required him to spend a lot of time abroad and a snake could be left to its own devices for weeks once it had been given a good feed.

This seemed to me less than a full explanation of why he kept a snake, because a snake is not like a dog that is pleased to see you when you return; it can show you no affection, learn very little, and, as far as a relationship is concerned, is more like a moving object than a living being. It is cold-blooded in more ways than one.

Forty years ago, it seemed extraordinary that anyone would keep a boa, but now, in Britain alone, there are more than 2 million snakes kept in captivity, various pythons being the most popular breeds. From time to time they appear on the streets, either having escaped after having been let out to bask in the sun, or abandoned by their now-frightened owners.

Having become curious some years ago about the phenomenon of snakes kept as pets, I visited pet shops specializing in reptiles (tarantulas in such shops are counted as honorary reptiles) and also a reptile rescue center, which had two ambulances to rescue reptiles in distress.

“No doubt part of the attraction of keeping reptiles is that many people are repelled by them.”

Reptile-keeping in general has increased pari passu with the proportion of people in the population with tattoos, though of course statistical association is not causation in either direction. Nevertheless, I was struck in the reptile pet shops by the prevalence and prominence of tattoos and piercings among the customers, who came in for their large blocks of frozen rats to feed their reptilian friends, presumably after defrosting. No doubt part of the attraction of keeping reptiles is that many people are repelled by them. The owner of one of the shops I visited was later found dead, floating in a nearby canal. He was dead before he reached the canal into which he had been thrown, but the murderer was never caught. It was generally rumored that he had been killed by a rival who, like him, illegally imported rare species that were protected. It was a turf war over illegal species. No doubt the illegality of a species added to their attraction to a certain kind of person.

Personally, I find snakes both fascinating and repellent. They are (to me) mesmerizing and horrifying in equal measure. I can quite see that they are a proper subject of scientific study. As a youth, I loved to read stories of giant anacondas; I lapped up Colonel Fawcett’s story of an anaconda 63 feet long. (Colonel Fawcett disappeared in the Amazonian jungle in 1925. Many years later, I flew over the Peruvian part of that jungle in Faucett Airlines. It is a tribute to the human capacity for superstition, even in a person as comparatively rational as myself, that I was relieved to have survived the flight.)

But why do people keep snakes? A British herpetologist explained it as follows:

Reptiles fit today’s modern lifestyles as they are less time-consuming, and can also be easier to keep, than other traditional pet species.

This, perhaps, is also part of the reason we have so few children: They do not fit our lifestyle. We are too busy for dogs, let alone children, who are not at all easy to keep and who not only hinder our ascent up the career ladder but also make it difficult to go out in the evenings. And what higher values could there be than ease and convenience? We don’t even want to waste our time cooking for ourselves; it cuts into entertainment time.

Perhaps the very fact that you cannot have a real affective relationship with a snake is part of a snake’s attraction as a pet. You can, perhaps, love your snake, but your snake cannot love you and therefore cannot withdraw its love. Care of a snake, besides being not greedy of time, is purely mechanical. You clean the cage, perhaps, and throw it some food, and that is the extent of your commitment. To treat a dog in the same fashion would be neglectful or downright cruel.

We seek to avoid emotional commitment because it impinges on our freedom—freedom being an infinitely large buffet or smorgasbord of choices, in which one choice does not preclude another later on. This attitude is perfectly appropriate to youth, which naturally enough wants to try many things before it settles on something that limits choice and creates obligation. But, as Ecclesiastes reminds us, “To every thing there is a season, and a time to every purpose under the heaven: A time to be born, and a time to die; a time to plant, and a time to pluck up that which is planted….” etc.

This is something that we are increasingly reluctant to accept. A pupil is now called a student, studenthood not being something that you grow into by virtue of work done as a pupil, but a kind of human right conferred by nature at birth. We are all Harold Skimpoles now.