Snatching Cultural Marxism From the Mouths of Hungry Babes 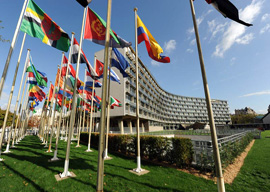 In keeping with its world-famous heartlessness, the United States has defunded UNESCO. The world’s innocent children are unjustly suffering even as you read this.

Such has been the predictable cry of outrage heard ever since UNESCO’s member states voted overwhelmingly to admit Palestine as a full member back in October. The vote automatically brought into force US laws passed in the 90s prohibiting government funding to any UN organization that accords Palestine the same status as member states.

Among the morally condescending media types condemning the US over the issue are The Daily Show and some random but delightfully entertaining veteran journalist named Tim King, a former Marine who says the US is snatching the last bread crumbs from hungry babes:

“If I didn’t know better I would be tempted to suggest that UNESCO’s real agenda is worldwide cultural subversion in preparation for some sort of New World Order”but that’s crazy talk.”

The world already hates Americans for unnecessary religious wars that are unjustified, now it can hate Americans more for pulling food from the mouths of starving children.

Then there’s the other half of mainstream journalism in the US: neocons such as David Frum. Frum was quick to respond to the Daily Show bit by penning a piece in defense of “Israel and those who value the US-Israel relationship.” By this Mr. Frum must mean his fellow neoconservatives and the Christian Zionists they’ve continually managed to con.

UNESCO’s response to the US defunding has been to lobby Washington. They’re apparently in the process of setting up an office specifically for that purpose. But rather than using the smear term “lobbying,” they’d prefer you called it “raising awareness,” just like they do.

UNESCO head and former Bulgarian Communist Party apparatchik Irina Bokova, one of many to have made a miraculous conversion to liberal democracy in the blink of an eye two decades ago, has made regaining US funding priority number uno. She’s been doing the rounds in the US to drum up sympathy. The Obama Administration seems willing to oblige her.