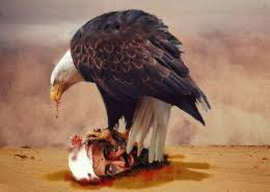 Like a candle in the wind/
Never knowing where to run to/
When the raid came in….

Tra-la-la! So let us join together and sing out loud, for the somewhat perforated body of a sonofabitch has been eased into the deep. Personally, I would have preferred his burning corpse to be catapulted to the waves and his severed head placed on a spike atop the USS Carl Vinson’s bridge. But then, I have always been a little bit Old Testament. I see nothing wrong in punishment and retribution as part of justice. Some”such as our kindly, misguided, and druid-like Archbishop of Canterbury“are troubled and discomfited by recent events. I too am troubled; troubled that the White House balked at releasing a decent post-assault pic to serve as my computer screensaver; troubled that in being shot, bin Laden is automatically disqualified from my Top Ten list of favorite counter-terrorist Hellfire missile strikes. One cannot have everything.

The hand-wringers and bleeding hearts, the liberal left and the lawyers, are already bleating about an “unarmed man” being summarily executed and are demanding an inquiry. It was all to be expected, for these types”pontificating, sanctimonious, sweaty-palmed, and often garbed in the robes of the clergy or the law”rarely possess the spine or balls or common sense to do anything but talk. They have never held a weapon, hunted terrorists, stormed a compound, or been in a firefight. To them, morality is simply an intellectual exercise free of actual practical decisions. It allows them either to fence-sit or find moral equivalence in everything. They somehow fail to distinguish between hijackers flying four large passenger airliners at American population centers and an ineffably brave squad of US Special Forces employing a quartet of Black Hawk helicopters in a precision strike against a known terrorist figurehead in his command hideout. So they wail and protest and talk of due process. Spare me the cant.

“If their wish is to reach paradise through violence, we are honor-bound to facilitate their premature entry.”

Problem is, bin Laden was not just another unarmed man, in the same way that Hitler was not when Claus von Stauffenberg delivered a briefcase bomb to the Wolf’s Lair in July 1944. It did not make the attempted assassination any less legitimate. Bin Laden might have been far from the front and not wearing a sidearm”might not even have been in charge of day-to-day operations”but he was a live threat, active in the field, a present and future danger. So America killed the bastard. Good.

I do not care if he was fornicating or taking a shower, would not squeeze out a tear if he loved his mother or his wives, was kind to the elderly, was praying or begging for his life. It would make no difference if the bearded lunatic was having a shit and scrabbling for the last square of lavatory paper. Two rounds did the job. Team Six showed admirable restraint.

After Bill Clinton’s inert moral cowardice, finally something has been done. Read the Commission Report into 9/11. There were ample opportunities to deal with al-Qaeda and its malign leader. Clinton chose not to, preferring instead to launch cruise missiles at empty adobe huts somewhere in Afghanistan”a grand and futile gesture from a president known for misapplying tubular objects to missions for which they were not designed. It took Obama”through commitment and a fair degree of luck”to bring matters to an acceptable conclusion. Maybe it is not the beginning of the end, but let us hope”as Churchill neatly put it”it is the end of the beginning. I do not see the Arab world complaining.