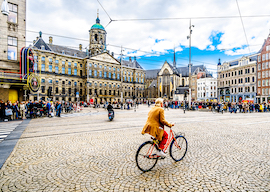 NEW YORK—The goddamn foreigners are trampling the tulips in Bollenstreek.

Yes, that’s what I said.

Amsterdam has decided to stop advertising itself as a tourist destination and to tell everyone to go elsewhere because, according to a local architect interviewed by CNN, the tourists are “destroying our soul.”

I’m not sure exactly how they’re doing this. I sometimes hear people in New York say that tourists are “destroying the city,” but what they usually mean is that billionaires from Brazil, Russia, and China are buying up all the real estate. That’s not what they mean in Holland. The city once known as the live-and-let-live capital of hippie tolerance has turned all surly and started banning Airbnb short-term rentals, souvenir shops, organized tours of the famous Red Light District, and cheap weekends from Luton Airport, because who the hell cares about that $91.5 billion a year that comes in from visitors? Ninety-one-point-five bil is just the gross national product of Slovakia, and Slovakia is not that big a country. The official tourist agency has started using terms like “overtourism,” “visitor overload,” “nuisance visitors,” and that plaint voiced everywhere from Monte Carlo to Belize to the Isle of Capri: “We don’t want to turn into another Venice.”

Many years ago I was a frequent “nuisance visitor” to Amsterdam. As a foreign exchange student at the University of Copenhagen, I would join forces with my fellow con man and roommate—we’ll just call him Steve—to convince luxury car rental agencies that they needed us to drive dead-end trips for vehicles that were dropped off in Copenhagen but needed to be moved to their next customer several countries away. We would pack suitcases, having no idea where we would be spending the week, and head down to the office of a bilious bureaucrat named Frederik who would haggle with us over how long it should take to transport a vehicle to, say, Barcelona—we would say nine days, he would say four, and we would settle on six—and then he would hand us the keys and a delivery deadline. All we had to do was pay for the gas and get the car to its proper destination on time while promising to drive safely.

Of course we immediately cranked it up to 150 kilometers an hour on roads that were marked for 80 because we had to make it to the car ferry at Halsskov by noon and the German autobahn by late afternoon on our way to…Amsterdam. Two full days there, two full days in Paris, then an all-nighter to St. Tropez or Barcelona or Lisbon—which is why it took two of us driving high-speed shifts—in order to drop off the car just in time to get the slow train back to Denmark and fake our way through the Viking Archaeology exam on Monday morning.

“I would recommend that tourists seeking thrills in a cosmopolitan urban center consider joining me in Greenwich Village.”

The reason I say we were “nuisance visitors” is that, in that heyday of the all-powerful American dollar, we never spent more than five dollars a day in Amsterdam. (I say this with certainty because we always carried the bible of the American college student in Europe, Arthur Frommer’s classic Europe on $5 a Day.) We were certainly undesirable tourists from an economic point of view, and probably from a social point of view as well. Even though weed was illegal, the culture of gedogen (“look the other way”) meant that hashish was openly consumed in various coffeehouse-type establishments where the girls were excessively friendly toward vagabond Americans. We went to the Red Light District a couple of times out of curiosity, but it was a little too hardcore for 19-year-olds who had no “older woman” issues. We liked Amsterdam because it was welcoming toward impecunious Americans at a time when Americans were becoming unpopular in Europe.

But let’s widen our perspective a little bit. KLM Royal Dutch Airlines, the flag carrier for the Netherlands, had been begging people to come to Amsterdam since the day the Russians took over the Reichstag in 1945. KLM was so aggressive about Dutch tourism that they were frequently hauled before the International Air Transport Association for violations of kickback rules, fare-cutting rules, government subsidies, and unfair trade practices that made it possible for people like me to fly New York–Amsterdam for $150 and then pop over to my final destination with a virtually free KLM flight within the borders of Europe. Every time Americans would squawk about KLM’s special privileges, Dutch officials would play coy and act like it was their due. Of course they should be allowed to fly to New York, Los Angeles, Chicago, Washington, and San Francisco. After all, Pan American World Airways, the United States’ flag carrier, was allowed to fly to Amsterdam, Rotterdam, Utrecht, Eindhoven, and Tilburg. KLM was essentially an elaborate government hoax, subsidized to the gills and designed for one purpose: to promote Amsterdam tourism.

The Netherlands was essentially playing the Las Vegas game: We’re not telling you to come here to be naughty, but we won’t tell anyone if you are. I was never much of a druggie, but I had plenty of friends who were, and they were talking about blends and strains and all the minutiae of both marijuana and hashish long before it became blogging material for El Lay hipsters. Where did they get that deep-dive level of cannabis info? Amsterdam. Where did they go for commercial sex with Baltic blondes? Guess.

Meanwhile, there was a constant barrage of Dutch publicity about the canals, the flowers, the slow food, the bicycle culture. (One of the current complaints is “too many bicycles,” meaning that the bicycles are for us, not the tourists. They’re basically complaining that the visitors cause bicycle jams.) The “paradise on Earth” narrative was never that accurate—Amsterdam has all the ills of any big city—but by keeping tourism confined to a certain picture-postcard area, they were able to carry off their story. (When describing the history of the Dutch fleet and its importance to trade, they fail to mention that Dutch ship captains were responsible for some of the worst atrocities against native populations in the world. These were the guys who wiped out the Pequots. They were violent and nasty.)

At any rate, since Amsterdam is now so prosperous that they no longer need the $91.5 billion, I would recommend that tourists seeking thrills in a cosmopolitan urban center consider joining me in Greenwich Village. I’ll be happy to direct you to the illegal, but safe, vices, and nobody will lecture you about where you choose to take selfies or whether you choose to ride a bicycle, use a scooter, commandeer a Segway, or rent a car. We know all about the Dutch. They ran this place for about forty years and were insufferable, arrogant, self-righteous greedy tyrants. It took about fifteen minutes for the English to kick ’em out in 1664, and since then everyone has been able to sing, dance, and smoke. Prostitution is still illegal—unlike in Amsterdam—but that’s because most of the girls are already friendly. (After all, we have aptly named Sex and the City tours.) More important, when the Dutch guy gets off the 4 train at the wrong stop or has trouble finding his way out of Kennedy Airport or starts to pay too much for that rip-off boat that goes to the Statue of Liberty, we tend to take pity on him and show him the New York shortcut. We don’t think there’s a limit on hospitality. We don’t think visitors are Soul Destroyers. We can deal with their needs and take their money and feel okay with it even when they clog up the sidewalks on 42nd Street. We consider them an asset. They can stay as long as they want. Ninety-nine percent of us were once tourists ourselves—tourists who decided to stay. Frightening, isn’t it?