“¨So Moses and Mohammed Walk Into an Open Mic … 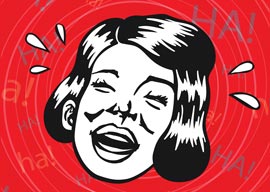 “I love Anne Frank humor as much as the next guy” is a line I could never get away with. Fortunately, I”m not the one who said it. The quote is courtesy of Jill Soloway, one of the hottest names in TV right now.

Soloway is the creator and producer of the Amazon hit Transparent, a new “dramedy” about a transgender parent. (Get it? “Trans-parent.” Yes, I know … it’s subtle.) In January, the show won the Golden Globe for best television series (musical or comedy), and Jeffrey Tambor won for best actor.

With Ms. Soloway (previously known for hits like Six Feet Under and Grey’s Anatomy) receiving a great deal of press these days, I”m reminded of a little-known incident from 12 years ago in which she featured prominently. It involves blasphemy, free speech, and, to put it bluntly, why Muslims are still a Homo erectus or two shy of being as evolved on the subject as Jews.

Our story takes place in that wild, crazy year of 2003. The human genome project was finally completed, the United Nations at long last brought peace to Liberia, and artists like Floetry, the Ying Yang Twins, Lumidee, and Joe Budden were redefining the music scene by driving millions of people away from top 40 radio. And at a popular theater in Hollywood, a drama was unfolding regarding Holocaust humor.

Comedy Central was sponsoring a twice-monthly workshop night for comedians and comedy writers at the Hudson Theatre, called Sit “n” Spin. The participants were generally well-established professionals who wanted to try out new material on an audience of their peers. It was supposed to be a friendly, safe environment for testing out new jokes.

“I despise the “punch up” school of politically correct comedy, which dictates that comedy must only target the big and powerful. To me, comedy has one goal: get a laugh.”

Enter Annie Korzen. A self-described “yenta” who had a small recurring role on Seinfeld, Korzen’s routine consists of jokes about why her grandkids don”t call, and “oy vey, it’s so hard to open pickle jars.” Great stuff for a Jewish home for the aged. Add Yiddle and his fiddle, and you”ve got a barn burner that will only close when the last audience member succumbs to Alzheimer’s.

Unfortunately for bubbeh Korzen, the night she chose to attend Sit “n” Spin was also the night that Jon Hayman (a Seinfeld writer who was nominated for an Emmy for his work on The Chris Rock Show) decided to try out his Anne Frank routine (for the record, Hayman is Jewish).

As described by the Jewish Daily Forward, in Hayman’s routine “he pretended to be Anne Frank reading a typical teenage girl’s summer camp diary entries”only the camp in this instance was Auschwitz. Hayman’s routine had Frank”who actually died in Bergen Belsen”innocently wondering why the Dachau and Auschwitz softball teams wore the same uniforms, referring to the pulling of gold teeth as a camp arts and crafts activity and offering lewd descriptions of sexual encounters with historical figures such as Jackie Kennedy, John F. Kennedy and Martin Luther King, Jr.”

I”m not going to pretend to be objective here”I would have laughed. I despise the “punch up” school of politically correct comedy, which dictates that comedy must only target the big and powerful. To me, comedy has one goal: get a laugh. If you can do it by mocking the high and mighty, fine. If you can do it by kicking a destitute old man in his withered nutsack, equally fine. You either get the laugh, or you don”t.

Well, yenta Korzen wasn”t laughing. She disrupted the performance, heckling and berating Hayman for such a blasphemous routine.

Enter Transparent‘s Jill Soloway. She was one of Sit “n” Spin‘s two producers. Sensing the possibility that this little blowout could create exactly the kind of media firestorm that would get her name in the papers, she asked Hayman to reprise his routine at the next show, with Korzen in the audience again (in other words, “take two, but this time with the cameras running”). Hayman refused, because he thought it was gratuitous and unnecessary to replay the incident.

“I love Anne Frank humor as much as the next guy,” Soloway told the Forward regarding Hayman’s routine. “I didn”t think that he shouldn”t have done it. It was certainly on that edge; it was something that was begging for the groans.””¨
Soloway invited Korzen to the next workshop anyway, to the disdain of some of the other performers and writers, who felt the “yenta’s” presence contradicted the entire point of the endeavor, which was to be able to speak, and blaspheme, freely. So incensed was Ron Zimmerman (who”d been a producer on 7th Heaven and V.I.P.) that he got onstage and read Holocaust revisionist literature right in Korzen’s face, just to make a point.

Korzen and Soloway refused to be interviewed for this piece. But I spoke to Jon Hayman, the man whose Anne Frank bit ignited the episode.

Hayman stands by the routine as a piece of comedy, but he expressed concerns that “the business” has become so politically correct that comedians sometimes avoid potentially offensive material, although he added that it’s way more dangerous these days to do material that might offend gay groups than it is to do Holocaust material.