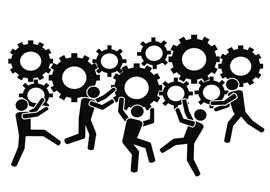 I am puzzled as to why racism is thought to be a terrible thing, rather than entirely natural and often reasonable, and why people allow themselves to be browbeaten about it. Maybe we should stop. Domestic tranquility would follow in torrents.

As near as I can tell, a racist is one who approves of rigorous education, good English, civilized manners, minimal criminality, and responsible parenthood, among other things. I am, then, a racist. I see no reason to grovel about it.

I decided long ago that if, while I was doing a radio interview, a caller-in told me, “You a racist!” I would hesitate as if puzzled, and say, “… So what?”

This would add immeasurably to the planetary supply of stunned silence. The expectation is that anyone so charged will fall on his knees and beg for mercy. It would be a lesser offense to be caught sexually molesting autistic three-year-old girls while attending a Nazi torch rally.

Herewith another and yet worse confession: I do not see, or care, why it is thought my duty to like, or dislike, groups because of their race, creed, color, sex, sexual aberration, or national origin. Nor do I think it their duty to like me. I especially do not understand why the federal government should decide with whom I ought to associate.

“I suppose we were racists, as we were assuredly discriminating racially: We thought Malays pretty. The horror. No doubt we were sinners all.”

But back to “So what?” Among its charms is that there is no answer to it, other than huffing and puffing and indignant expostulation. All of these amuse me. Used frequently, “So what?” would shut up people who badly need to shut up, or else force them to think. Not likely, as most apparently cannot.

Let us, improbably, glance at reality. A characteristic of human groups is that they do not like each other. The greater the difference between the groups, the greater the dislike; the closer the contact between them, the more open the friction. Note that before the advent of mass immigration, Americans of whatever politics had no dislike of Hispanics.

Thus separation increases the likelihood of amity. Is this not obvious? The instinctive rancor between disparate groups accounts for most of the world’s problems. Muslims and Christians dislike each other, Tamils and Sinhalese, Cambodians and Vietnamese, blacks and whites, Americans and Frenchmen, men and women, homosexuals and the normal, and, as Tom Lehrer famously sang, “… everybody hates the Jews.”

Except that in America Jews are so assimilated that most of us don”t remember to hate them. They aren”t different enough. I”ll have to make myself a note.

Humans like to be among their own kind. This can mean many things. It can be political. In Washington, white liberals cheerlead for diversity while spending their time exclusively with white liberals and execrating Southerners, Jesus Creepers, genocidal conservatives (understood to mean all conservatives), Catholics, racists, owners of guns, rednecks, and so on. No dissenting voices are heard because, like conservatives, liberals choose to be among their own. Similarly, if in any of Washington’s dives you know that one person in a table of six has an IQ in excess of 130, it is a good bet that they all do. It isn”t snobbery. Smart people enjoy the company of smart people. Their own kind. So what?

If left alone, people will naturally and peacefully form such associations as seem to them desirable. If left alone. So what?

In all of this, I am a bit of an outlier, having lived among many cultures and generally liked them. Some can do this. Yet as a white American of European extraction, I too want to preserve my culture. This involves (or did) respect for law, studiousness, the production of children within marriage, self-reliance, honesty, sexual restraint, and so on. Another part of my cultural package is the literature of Milne, Milton, Twain, Galsworthy, Gibbon, and others at length. I want my children to read them.

However, I do not want to impose my values and culture on others. American blacks for example are truly African Americans, and quite reasonably may have as little interest in European history as I do in African. Rationally this would argue for separate schools where each could study what and as he chose. For reasons impenetrable to me, to suggest this is thought worse than genocide.