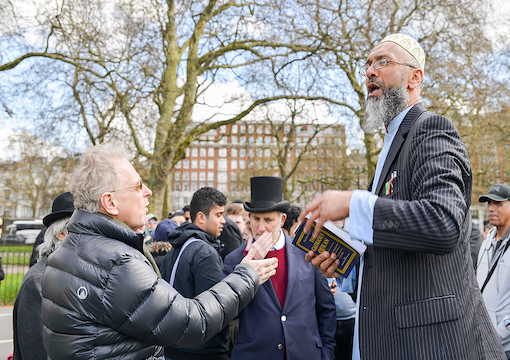 Despite recent strong runners, Sir John Major is probably the worst Conservative prime minister Britain has had in modern times. But just as a stopped clock tells the right time occasionally, he made one resonant statement:

How many times has Islam stepped on the collective foot of the English? A recent violent incident at a historical site may not help what the police call “community relations.”

London’s Hyde Park Corner is famous as a temple of free speech. Theoretically, and dating from 1872, anyone can say anything at what is known as “Speaker’s Corner” with no risk of arrest. Those who have held forth there include Marx, Lenin, George Orwell, Marcus Garvey, and English suffragette Christabel Pankhurst. However, none of these, as far as I am aware, was ever stabbed in the face for their views. That precedent has now changed.

A woman initially described by a disingenuous media simply as “a 39-year-old wearing a Charlie Hebdo T-shirt” was slashed across the face and arm last month by a masked attacker. The media knew perfectly well who she was. London’s version of the Keystone Kops has, however, made no arrests, although they have told the public “not to speculate” about the attacker. But given that the victim is being counseled by SO15, Britain’s anti-terrorism unit, the attacker is likely not a Seventh Day Adventist or a Scientologist.

“Freedom of speech is gone when a priority of both government and its provisional wing in the media is to protect brand Islam.”

The victim, Hatun Tash, is an apostate from Islam—a transgression punishable by death, the Koran informs me—who now preaches evangelical Christian doctrine. She had been removed from Speaker’s Corner previously “for her own safety” after a large crowd of Muslims surrounded her. English firebrand Tommy Robinson was arrested defending her. She openly criticizes the Koran and Muhammad. The police are undoubtedly happier that she is out of the way, and, as for arresting anyone, they are staying in the doughnut shop for this one, despite around thirty people with mobile phones witnessing the attack.

Interestingly, although anyone can speak on anything at Hyde Park Corner, religious observance is not allowed. The Royal Parks Agency (Her Majesty owns all London parks, just as she owns every swan in Great Britain) has a policy about public prayer, as opposed to public speaking, in Hyde Park. From its homepage:

The Royal Parks (TRP) does not permit collective acts of worship or other religious observances in the TRP estate….

However, when a white woman complained about Muslim prayer at Speaker’s Corner in 2018, the police—in response to a Freedom of Information Act request to which they are obliged to respond—stated that “no group or individual has been given dispensation to pray in this or any other area of Hyde Park.” That is as may be. Muslims in Britain and across Europe don’t require “dispensation” to do anything. They just do it and, if there is any impertinence from the kufr authorities, let rioting commence. For some time now it has been clear that the police no longer police Speaker’s Corner, Britain’s most famous locus of free speech, or indeed much of some inner cities. Muslims do.

The woman who complained about Muslim prayer was arrested shortly afterward at her house, two police officers dragging her along her own hallway with one shouting, DO NOT RESIST US! The video of her arrest seems now to be unavailable on YouTube.

Speaker’s Corner, and the tale of Hatun Tash, is Britain now in miniature. Muslims control and police a considerable amount of urban space. It is not unusual to see posters on lampposts marking out a Muslim area, and stating that alcohol, homosexuals, and dogs are not welcome as Muslims tend to hate all three. And speech is controlled just as tightly as is territory.

If a person, particularly an apostate woman, is critical of Islam, even in a public space in a country built on freedom, this is a particular insult to the Muhammadan goombahs—and totally ignored by what passes for feminism—which is why that political ideology masquerading as a religion tends to make its mark early, if it can. Just ask any Muslima, particularly one who has no clitoris.

Freedom of speech is gone when a priority of both government and its provisional wing in the media is to protect brand Islam. Britain is home to one of the greatest scandals of modern Western times, the so-called “grooming” gangs of Rochdale, Rotherham, Oxford, and a host of other once-traditional English towns. Thousands of underage girls were—and allegedly are still being—raped by Muslim men over a period of decades while police forces were told to ignore it, and even to “look for other ethnicities.” The police have admitted this and yet, although they have prosecuted a few of these monsters, they are quick to act against anyone who highlights the scandal on social media.

Knife attacks across Europe are only one aspect of the new reconquista. A combination of demographics, so-called “lawfare,” and a total paralysis of the authorities when confronted by Muslim aggression is gradually ceding ground to Koranic, or sharia, law. If Britain continues to fail to stand up to Islam they will inevitably end by serving it.

It was remiss of me not to have mentioned another famous orator at Speaker’s Corner, where the speakers originated the phrase “getting on your soapbox” by standing on one to be heard above the crowd. This excerpt rings truer than ever after the stabbing of Hatun Tash:

Sir Winston Churchill was a great critic of Islam and at the other end of the league table from John Major as a Tory PM. I don’t imagine anyone stepped on his foot a third time.