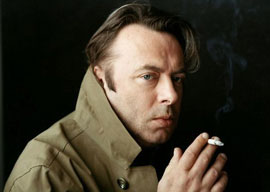 Some questions are asked in a spirit of inquiry, to obtain answers, but others are asked to intimidate or badger or coerce agreement with a point of view and establish the irreproachable virtue of the persons who ask them. I received such a question by email the other day from the Lancet, one of the most important medical journals in the world. Addressing me by my first name (already sufficient to irritate me), it asked me, “Do you care about the health of our planet?”

Frankly, the answer is that I don”t. Planets, unlike dogs, are not the kind of thing I can feel affection or concern for. My bank account occupies my mind more than the health of the planet. I am not even sure that planets can be healthy or unhealthy, any more than they can be witty or self-effacing. To call a planet healthy is to make what philosophers used to call a category mistake. This is not to say that I wish the earth any harm; on the contrary. Indeed, in a multiple-choice examination, I might even tick the box for wishing the world well rather than ill, at least if I had any reason for wanting to pass.

There is something deeply Pecksniffian about the question. Mr. Pecksniff, you might remember, is a character in Dickens” Martin Chuzzlewit, a religious hypocrite who names his daughters Charity and Mercy””not unholy names, I think,” he tells us. But in action, Mr. Pecksniff’s self-proclaimed love of humanity is a screen for his complete lack of scruple. He loves humanity but he swindles people.

“The most virtuous person is he who expresses the most all-encompassing benevolence at the highest level of abstraction.”

As befits an era in which virtual reality is more important to many people than reality itself, the expression of high-flown sentiment is now taken by many as the major part or even the whole of virtue. The most virtuous person is he who expresses the most all-encompassing benevolence at the highest level of abstraction. I felt like writing back to the editor of the Lancet (only he wouldn”t read it) that I disagreed with his discriminatory planetism: that I cared only for the health of the universe, or universes, if the speculations of the astrophysicists about the existence of other universes turned out to be true.

And what about the welfare of the black holes”had the editor ever thought of that? Surely they deserve consideration. In view of the negative connotations of these much-derided holes” extant moniker”bringing to mind as it does a singularity that sucks things in and annihilates them totally”shouldn”t we be calling them something else; non-white holes, perhaps? Then again … a black hole could annihilate the earth in a fraction of a second. I think I might found an international Association for the Abolition of Black Holes (both in name and in fact).

“Do you care about the health of the planet?” is a question not quite in the class of “Have you stopped beating your wife yet?,” but it is approaching it. As it turned out, reading further, the health of the planet meant the health of the people on the planet, with a little biological diversity mysticism (the new paganism) thrown in. “Our aim is to respond to the threats we face: threats to human health and wellbeing, threats to the sustainability of our civilisation, and threats to the natural and human-made systems that support us.” The saintly editor was vouchsafed a vision, though expressed in the first-person plural: “Our vision is for a planet that nourishes and sustains the diversity of life with which we co-exist and on which we depend.” Hands up, then, all those in favor of spreading as widely as possible the threats to human well-being and of eliminating all forms of life but our own.

It must be a terrible thing to have such boring thoughts, not occasionally but repeatedly, if not constantly, and feel obliged to express them. But let us return to the problem of bullying questions, to which we are expected to return only one answer. Among such questions is “Do you mind if I smoke?” In my case, when I am in a confined space with a would-be smoker, the true answer is, “Well yes I do mind, actually, not enormously, but a bit.” But the answer I actually give is “Of course not.” Is this politeness and sociability, or pusillanimity?