Someone Righteous This Way Went 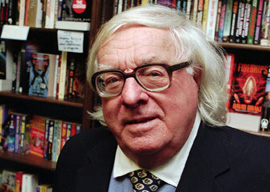 Ray Bradbury is dead. For the past twenty years I have dreaded writing those words. The effusive homages to a man who was arguably America’s greatest living writer are in full flood; this is one of the few times they are deserved. Although personally unassuming and approachable, he has had a tremendous influence.

Bradbury is often called a science-fiction writer, which is true to a point. If you wanted hard SF Ã  la Isaac Asimov or Arthur C. Clarke, you would be severely disappointed. Bradbury’s technical details were fuzzy and there was a dreaminess to his work, whether set on Mars or in Ohio (or both at once). His settings were not restricted to space or the future, either. For all that Bradbury was entranced by the future, nostalgia suffused his work”often with a dose of lightheartedness. In his work, even the vampires could be whimsical as well as chilling.

He was a bona fide American Romantic, cut from the same cloth as Washington Irving, Nathaniel Hawthorne, or Edgar Allan Poe. As with those writers, setting a mood was paramount in his work.

“The effusive homages to a man who was arguably America’s greatest living writer are in full flood; this is one of the few times they are deserved.”

I met him perhaps two dozen times over the years. The first was when I was 16 and drunk on The Martian Chronicles and Something Wicked This Way Comes. A fan letter I sent to him elicited a form response that thanked me for my note and explained that it was impossible for him to reply to fan letters personally”yet it bore a handwritten sentence inviting me to a lecture he was giving at Hollywood High. It was a brilliant talk.

Afterwards, at the ritual signing of the books, I explained that I had none of his own on hand, just a book on beekeeping to which he had contributed. He laughingly declared that would do, signed it, and then, looking at the authors” names, said, “We don”t need these guys!” Scratching out their names, he added “by” over his own.

I kept bumping into him at the UCLA and LA Central libraries, at Vroman’s and the late lamented Dutton’s bookshops, and at the ABA conventions out here.

Fahrenheit 451 was a dystopia born out of a real fear for the future of one of his greatest of all loves”and for a true bibliophile it embodies as fearful a notion as anything in 1984 or Brave New World.

He encouraged young writers and readers to pursue their dreams, observing that it was pointless spending your life doing something for which you did not care.