Someone’s Over the Rainbow 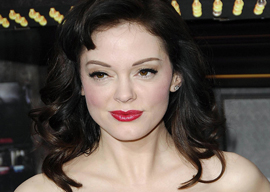 Which one is Rose McGowan again?

It’s a complaint as old as Sunset Boulevard: “We had faces then,” and all that.

Presumably the same gene that makes new music sound like noise sometime around your 35th birthday also renders you incapable of distinguishing one recently minted “star” from another.

Back when I cared about new movies, nobody confused, say, Gene Wilder with Gene Hackman, or Jill Clayburgh with Jill St. John.

Whereas, at least to my aging eyes, today’s young “actors” are indistinguishable, with their carefully cultivated stubble and skinny, shiny suits. And my brain is convinced that Jennifer Lawrence, that chick who married Ben Affleck, and that one from the high school vampire franchise are all the same woman.

Anyhow, whoever she is, this McGowan person should be in pretty big trouble right about now.

Apparently, that boycott of the Brunei-owned Dorchester Hotel chain I”d forgotten I”d written about back in May is still going on. Then as now, some leftoid celebrities were protesting the sultanate’s “strict form of Sharia law” that calls for “the severing of limbs for theft, as well as stoning to death for adultery or homosexual acts.”

“Rose McGowan’s biggest sin was airing the movement’s dirty rainbow flag in public. Or, more accurately, she washed the thing on “hot,” the colors ran”and she didn”t care.”

Why, yes, these are the same people who accuse “right-wingers” of “Islamophobia” whenever we wearily point out identical “cultural customs” abroad. But you should realize by now that when liberals do it, it’s … different.

Putting my “thanks for coming out” peevishness aside, I”m prepared to slow-clap these folks for courageously speaking out against, er, gratuitous maiming and killing taking place in a tiny, faraway country. Yay, you!

I mean, who could possibly be against such a boycott, no matter how pointless or parodic?

Novelist Bret Easton Ellis, for one. The more or less gay American Psycho author has frequently expressed impatience with his “community’s” causes and their manner of fighting for them.

(I employed scare quotes because Ellis, to his credit, balks at that very concept, and he’s onto something. Isn”t a “community” founded upon a shared sexual proclivity pretty weird? Do a particular stripper’s customers think of themselves as “the “Crystal on Stage Three” community”?)

On his most recent podcast, Ellis called the Dorchester boycott a “form of narcissistic, self-victimization, gay insanity.” He dismissed reports of Brunei’s adoption of Sharia law as “illusionary,” insisting that the boycott’s real victims were lowly hotel employees.

That’s when his guest McGowan jumped in, saying “Gay men are as misogynistic as straight men, if not more so.”

If gay activists care so much about Sharia law, she asked, why don”t they stand up for women in Islamic countries who are hanged or stoned to death?

“I see now people who have basically fought for the right to stand on top of a float wearing an orange Speedo and take molly [MDMA].”

As you had guessed, a few professional homosexuals, like Stonewall’s head of policy, quickly denounced McGowan, implying that comments like hers contributed to, and were even indicative of, the (greatly exaggerated) “abuse and bullying” gay people experience every day, etc. The standard lavender boilerplate.

Most commenters fail to point this out: the Stonewall was a filthy, Mafia-owned dive bar that was so historical and sacred and meaningful that it went bankrupt right after the “rebellion” of “69, and nobody remembered what the heck it was for 15 years.

Dear gays: When your Alamo has glory holes instead of bullet holes, that tells the rest of us more than you probably intended about your true motivations and priorities.

Inside the Stonewall back in the day, the Speedos might have been jockstraps, and the molly might have been poppers, but McGowan’s observation is undeniably accurate: to hear some of them talk, the gay rights movement’s proudest accomplishment”hence these parades” universal moniker“is that they now get to move the party outside once a year, with the blessing of multinational corporations and the state. Take that, Lech Walesa!