Son of A Raisin in the Sun 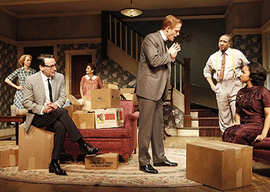 Bruce Norris’s Clybourne Park, winner of this year’s Pulitzer Prize in New York and Olivier Award in London, is the play I’ve been waiting for since the 1980s. Although Norris previously wrote six dramas for Chicago’s Steppenwolf Theatre Company, Steppenwolf will finally stage his masterpiece beginning September 8th.

It’s a bitterly funny two-act play set in the same two-bedroom house on Chicago’s Near Northwest Side in white-flight 1959 and then in gentrifying 2009. Norris is superb at writing dialogue in How We Talk Now. While most playwrights live for eloquent speechifying, Norris’s 2009 characters converse realistically in interrupting, overlapping, and apologizing snatches. Moreover, Clybourne Park is the first work I can recall to capture precisely what urbanites talk about most obsessively (real estate); how they converse (euphemistically); and why (the 3Ls of real estate are “location, location, and location,” which in Chicago means, above all else, race).

“Norris is superb at writing dialogue in How We Talk Now.”

In my 18 years in Chicago, I was involved in innumerable conversations that included the phrase, “It just needs a little tuckpointing.” Yet how many famous plays or movies center around real estate? Sure, there’s David Mamet’s 1983 drama about Chicago real-estate salesmen, Glengarry Glen Ross.

The most relevant, though, is Lorraine Hansberry’s 1959 Broadway smash, A Raisin in the Sun. Hansberry based it on her family’s famous NAACP-backed lawsuit Hansberry v. Lee that supported their efforts to buy a house in an all-white Chicago neighborhood she calls “Clybourne Park.”

Raisin is now a standard on school reading lists. Yet after years of living in Chicago, Norris, a Jim Carrey lookalike, asked himself:

…what if we turned the story around and told it from the opposite angle, the angle of people like my family, the villains, the ones who wanted to keep them out?

Thus, the first act of Clybourne Park is set in 1959 in the house at 406 Clybourne St. that Hansberry’s heroes are trying to buy. Norris has Raisin’s bad guy, Karl Lindner, try to protectively purchase the house not just from the black family moving in, but also from the white family moving out.