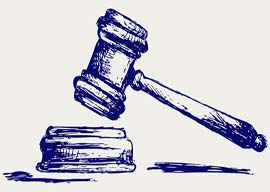 An English judge called Beverley Lunt, known locally for her leniency, recently suspended the prison sentence of two brothers who appeared before her because they were contrite, or rather because they expressed contrition, which, as we shall see, is not quite the same thing. They were charged with dealing in cannabis.

There are many, of course, who now think that this should not have been a crime in the first place. Though looking at the photos of the two brothers, who admittedly may not have been at their best at the moment the pictures were taken, it was difficult to imagine that if they were not dealing in cannabis they would have been engaged upon some respectable trade such as street cleaning or refuse collection. The theory of Cesare Lombroso, the late-19th-century Italian criminologist, anthropologist, and doctor, that criminality is inscribed genetically upon the faces of criminals may have been conclusively disproved, but yet we all assume with varying degrees of consciousness that it is true.

Nevertheless, the good judge believed them when they said they were sorry for what they had done, and did not send them to prison. No sooner had they left the court, however, than they posted comments of great vulgarity on Facebook mocking the judge. She called them back to court and told them that they would now have to serve their prison sentences after all.

This seemed to be petulance on the part of the judge rather than justice. She was humiliated by the public exposure of her naÃ¯vetÃ© and poor judgment; her amour propre was wounded. It was not she who had taught a lesson to the criminals but they who had taught her one. Though whether it was one she learned remains to be seen.

“The demand for public expressions of contrition is the demand to be lied to, and it rewards thespian skill more than moral regeneration.”

Contrition in the context of criminal justice is in any case of doubtful significance or value. It is good, of course, that people should be contrite about their ill deeds (criminal or not), but public expressions of contrition are another thing entirely. They are all too easy and where there is an obvious tangible benefit to making them they are worthless as a guide to a person’s real state of feeling. You would have thought that nobody who had reached Beverley Lunt’s age would fail to understand this.

I suppose the notion that the expression of contrition is significant derives from the supposition that it indicates a desire for reform; and if a person desires such reform, he is less likely to reoffend.

Again, one might have thought that a little self-examination would be sufficient to show that this is doubtful, to say the least. How many times have we felt genuine contrition at having done something that we knew that we should not have done, only to repeat it sometime later (I assume this is the common experience of mankind)? Whenever I lose my temper I feel wretched at having done so; I resolve never to do so again. But though this is all very genuinely felt, I would not place any money on a bet that I shall never again lose my temper. And this is in circumstances in which my contrition and resolution, were I to express them publicly, would procure me no benefit.

This is not to say that the law should be inflexible. It is obviously part of justice that extenuating circumstances should be taken into account. But an extenuating circumstance is something that exists in the past, not in the future. If, for example, the brothers initially not imprisoned by Judge Lunt had dealt in cannabis to raise money for the expensive care of their aged mother, money that they had no realistic likelihood of raising in any other way, that would have been an extenuation. But an implicit promise not to repeat the offense, even if sincerely meant at the time uttered, is not an extenuation.

In fact, the demand for public expressions of contrition is the demand to be lied to, and it rewards thespian skill more than moral regeneration. Often such expressions are laughable, though no one actually laughs. How seriously is one supposed to take (as I have heard recounted to me) the alleged realization that smashing a baby’s head against the wall and trying to stuff its body down the lavatory is wrong? Moreover, even if such a realization were as genuine as Buddha’s enlightenment under the sacred Bo Tree, of what importance would it be, what would it count for? Is everything made right by a little light contrition afterwards?