Sorry, We Invented That Too 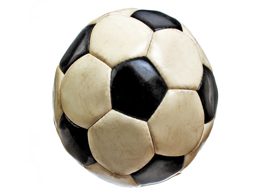 Soccer, while traditionally lacking in highbrow accoutrements like sophisticated statistics (although those are improving) or literature (the most memorable English-language book on the game is American writer Bill Buford’s memoir of English soccer hooliganism, Among the Thugs), is a wonderful sport for acting out the primordial instinct of territorialism. You get your lads together and we”ll get our lads together and see who wins. And if there isn”t enough action during the game, well, the stouter fellows can meet afterward behind the stadium for a little semiorganized mayhem.

Soccer is the only sport whose organic ties to its populist fans truly scare European elites, reminding them of Gibbon’s account in The Decline and Fall of the Roman Empire of how the fans of the Blue and Green chariot racing teams united to almost overthrow the Byzantine Empire in 532 A.D.

Likewise, the modernization of soccer into a more corporate media-friendly spectacle has been carried out largely by men of the right like Silvio Berlusconi in Italy and Rupert Murdoch in England.

But every four years during the World Cup, white American liberals project their status strivings onto soccer and their convoluted ethnic resentments onto traditional American sports. Even though the World Cup embodies nationalist chauvinism at its most frenzied, liberal whites in this country see it as a repudiation of patriotic Americans. For example, former New Republic editor Peter Beinart trumpets in The Atlantic: “Ann Coulter Is Right to Fear the World Cup: America’s growing coalition of soccer fans looks a lot like the coalition that got Obama elected.”

This might come as news to the core of the Obama coalition, African Americans. The key to Obama’s reelection in 2012 was the unexpectedly high turnout among blacks, especially older women. And church ladies who like Tyler Perry movies aren”t hugely excited by the World Cup, much less FC Barcelona.

Even black men hold soccer in so little regard that they won”t kick field goals in the NFL. Although blacks make up about two-thirds of pro football players, none has had a substantial career as a placekicker in the NFL since Nigerian soccer player Donald Igwebuike in the 1980s.

One irony is that compared to American football and basketball, whose rules have been frequently tinkered with to give sprinting athletes of West African ancestry advantages by stopping the action to allow them to rest, soccer’s rules are set to encourage a broader biological diversity of races. The top soccer player of this decade, for example, has been the anti-LeBron, the stumpy white Argentinean Lionel Messi. The 20 highest paid soccer stars in the world appear to be about four-fifths Caucasian by ancestry.

This is one major reason why American fans”especially Republicans who are used to sports manipulated to showcase blacks”find soccer’s rules frustrating. And yet soccer seems to be doing fine in terms of global popularity the way it is.

But Beinart isn”t really interested in blacks. Instead, he sees soccer’s rise in popularity as retribution upon those old WASPs who oppressed Ellis Island immigrants:

So why didn”t soccer gain a foothold in the U.S. in the decades between the Civil War and World War I, when it was gaining dominance in Europe? Precisely because it was gaining dominance in Europe. The arbiters of taste in late 19th and early 20th century America wanted its national pastimes to be exceptional. … Soccer, by contrast, was associated with foreignness in an era when mass immigration was spawning Coulter-like fears that America was losing its special character.

Revenge is a dish best served a century cold.

Beinart crows that soccer will triumph because, compared to the bad old days of a century ago:

This might come as news to American golf and tennis fans, both of whom follow ostentatiously British games that were beloved by “arbiters of taste” in the U.S. The tennis tour is currently at its most prestigious event, Wimbledon. The U.S. Open golf tournament was recently contested at Pinehurst No. 2, which had been fanatically restored by the blue-blooded United States Golf Association to look just like it did when Scottish immigrant Donald Ross, the busiest golf architect in the U.S. in the first half of the 20th century, managed it.

The reality is that soccer, like most major sports in today’s world, is a triumph of WASP cultural imperialism.