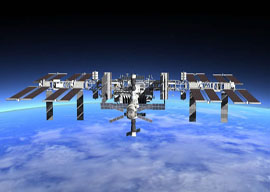 If all goes as planned, May 19 will see the SpaceX ship blast off to resupply the International Space Station, marking NASA’s official opening of space to private enterprise. In SpaceX’s wake, several private corporations are entering this mercantile space race”all to compete initially both for NASA’s business and for the satellite trade. But it also marks mankind’s serious entry into space.

Throughout the history of Europe’s expansion over the globe, government funding might have spurred and defended advances into new territories, but trading companies secured the trade routes, settled them, established the infrastructure those regions now enjoy, and brought back the profits that made further expansion possible and necessary. A host of private spaceflight outfits like SpaceX are poised to play the same role in cislunar space.

“We need a breakthrough, and the only peaceful one on the horizon is beyond our atmosphere.”

Most of these companies will fail. But for those that succeed, the profits shall in time be enormous”and essential for the rest of us. It is not just the technological benefits although, in its history, NASA has produced some 30,000 technological innovations that we use in everything from advanced medical care to everyday life. This expansion is absolutely necessary if the current global economy is to survive.

This may sound overly dramatic. But the sad truth is that the mountains of debt under which we labor here and abroad cannot be paid off, no matter how austere the world’s governments attempt to become”and as the French and Greek elections show, few populations inured to an artificially high level of government-sponsored living are willing to relinquish it. This leaves their masters stuck with the Hobson’s choice of runaway inflation or depression and unemployment. In the developed world, demographic meltdown further complicates the mess.

What is required if our current standard of living in the West is to be maintained is the creation of new and real wealth, plus equally new and real demand to absorb excess productivity. The prospect of such creation as things stand is low, and no amount of redistribution can accomplish it. We need a breakthrough, and the only peaceful one on the horizon is beyond our atmosphere. (A new World War might do the trick but would bring other problems.)