Spanked by the Iron Lady 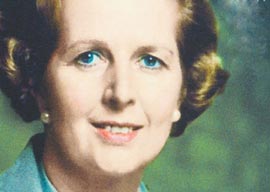 Hey, did you hear that “Margaret Thatcher wanted to ban sex toys“ when she was prime minister?

At least, that’s what a bunch of headlines blared at the fag end of last year.

But that story broke while I was on vacation. (Yes, frequent commenters, that is why your index finger put on a little weight over Hanu… I mean, Christmas: it hasn”t been striking that “J” key with quite as much frequency as usual.)

As Taki’s de facto sex toy correspondent, it falls to me to tackle this oh-so-urgent”some might even say “throbbing”””news” story.

I”m kidding about the “urgent” part, of course, except in the sense that (gee, who knows why?) it suddenly seems urgent, at least to me, to retreat into a bunker of nostalgia.

These recently unsealed documents out of 10 Downing Street, released by Britain’s National Archives, are 30 years old … I miss you, too, 1984, by the way. Back then I had a 20-inch waist. The most expensive thing I owned was the PiL “Metal Box.” We were still a few years away from the day my best friend went to work at a place where, she explained, “You could communicate to people all over the world using computers,” and I replied, quote: “Why the f*** would anybody want to do that?”

“And what about Thatcher, the first female prime minister of the U.K.? Wasn”t that cool? Weren”t we supposed to be feminists?”

My friend”all my friends in those days”believed Margaret Thatcher and Ronald Reagan were the personifications of evil. I knew I was supposed to believe that, too. But I didn”t really. Not about Reagan.

And what about Thatcher, the first female prime minister of the U.K.? Wasn”t that cool? Weren”t we supposed to be feminists? But actress Glenda Jackson spat out that Margaret Thatcher “wasn”t a proper woman.” So. All the musicians I admired sang about how horrible Thatcher was. I was torn.

So today, as people my age are helping to run what’s left of the mainstream media, they”ve quite predictably leapt upon the “Thatcher sex toy revelations” like Sid James on Barbara Windsor.

Allow me to save you the trouble.

First, what nobody seems to want to mention is that these memos about pornography, sex toys, and the moral panic of the day””video nasties“”were all prompted by a (failed) private member’s bill proposing strengthening the existing Obscene Publications Act of 1959. That private member was … Winston Churchill. But he’s a “good guy,” not a “bad guy,” so whatever.

So some in Thatcher’s inner circle, along with another 1980s personification of evil, the ubiquitous anti-smut campaigner Mary Whitehouse, went back and forth proposing their own suggestions for a more robust bill they could table in the future. Let’s call it “spit balling.”

In one of these memos, the Home Secretary, Lord Brittan, writes:

A further area in which the law could usefully be strengthened is the supply of sex aids. (…) Some of the items in circulation are most objectionable including some which can cause physical injury. This is a strong case for bringing sex aids fully within the scope of the “deprave and corrupt” test in the 1959 Act.

That’s it. For all we know, Thatcher rolled her eyes and muttered something that fit the then-legal definition of obscenity under her breath.

Actually, that’s pretty easy to believe, if you”ve heard the one about the time Christopher Hitchens met the Iron Lady. He mooned her, and she ordered him to “bow lower,” and then, Hitchens recalled, she “smote me on the rear with the parliamentary order-paper that she had been rolling into a cylinder behind her back,” then mouthed “the words: “Naughty boy!”””¨
On the matter of sex toys, then, that the lady wasn”t for turning (them off) comes as no surprise.

Hitchens goes on to admit”in his memoirs, written decades after that very British encounter”that he, who considered himself the quintessential man of the left, had even then begun to secretly entertain a forbidden, heretical thought: that on some essential matters, she might be right.

Others took a lot longer.