Spare a Thought for the Late Abandoners 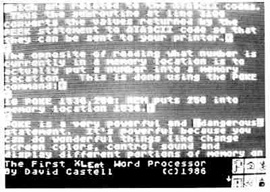 You’ve probably heard the phrase “early adopters” used for the first brave souls to take up a new technology. Early adopters are much loved by hi-tech firms: They serve as end-of-line product testers, shaking out the last few wrinkles while paying for the privilege.

Well, everything in this universe has its opposite, every yin its yang. Whether or not you are an early adopter, spare a thought, please, for us late abandoners.

The inspiration for this column comes from the January 19th issue of The New Yorker, which I have just been looking through.

I say “looking through” because if, on a conservative website, you confess to actually reading that magazine, people cut you out of their wills. The editorial line of TNY is Cultural Marxism naked and unashamed. The lead editorial in the aforementioned issue, for example, is a long shriek of horror at the notion that voters should have to identify themselves at the polling booth. It calls for the 1965 Voting Rights Act, which ought to have been repealed long ago, to be strengthened to deal with this outrage.

“If we are to learn complex new data-entry skills every twenty years, when shall we have time to think?“

All right, all right, maybe I’m a metro-con at heart: red outside but blue inside. (“A lovesick Apache” was the best “Oreo”-type simile my wife and kids could come up with when I challenged them for one.) TNY nonetheless runs some good meaty nonpolitical articles, and the cartoons are still of a high standard. It’s worth…looking through.

So there I was, reading”sorry! sorry!”looking through a rather dull article by veteran nonfiction writer John McPhee. The piece is titled “Structure” and deals with the way McPhee organizes his material.

That is borderline interesting to me. I undergo periodic spasms of guilt about making a living by writing, an occupation for which I have never had any formal training. I should get more professional, I tell myself: take a creative-writing course; schmooze publishers and agents; start a Twitter feed, whatever that is; remember that “embarrass” has two r’s but “harass” only one, so I don’t have to look it up every damn time; try harder to give a flying falafel about the zeitgeist; and yes, learn how to structure my material.

McPhee was making a bit of a meal of his topic, though. Frankly, I didn’t think the piece was very well structured. Around a third of the way through I was about to give up when suddenly McPhee’s hand came up out of the page like Carrie’s from the grave and grabbed me.

He’s writing about his switch in the 1980s from index cards and a manual typewriter to a personal computer. An IT manager at Princeton University got him started:

He listened to the whole process from pocket notebooks to coded slices of paper, then mentioned a text editor called Kedit, citing its exceptional capabilities in sorting….

That was the Carrie moment. KEDIT (the system documentation always prints it in uppercase) is my text editor of choice. I’ve been using it as long as McPhee has, and before that I was coding for IBM mainframes using XEDIT, which was the inspiration for KEDIT. I probably spend more time in KEDIT than in any other program. I do most of my writing in native HTML, entering it into KEDIT, with a mass of KEDIT macros for one-key insertion of all the commonest HTML tags.