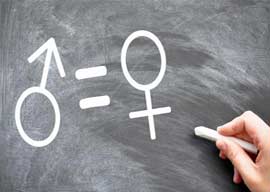 There are no fishermen left in Washington State. As of July 1, they are all now “fishers.” There are no longer any “firemen,” only “firefighters.” The state’s “clergymen” have been banished to make room for a genderless “clergy.” All of the college “freshmen” have gone on to become sophomores and will be replaced by a new crop of “first-year students.” And none of them practice “penmanship” anymore, only “handwriting.”

It’s all part of a grand utopian scheme of Washington’s starry-eyed Genital Deniers to banish “gendered” language from the state’s constitution and official documents. Tellingly, certain phrases have been left unaltered. You can still call a conman a conman, and a manhole will remain a manhole. And the word “seaman” will remain the exclusive domain of those whose bodies can produce semen.

Washington is now the fourth state (after Florida, North Carolina, and Illinois) to mandate persondate “gender-neutral” language in its official documents. The state’s Office of the Code Reviser will keep its 40 employees busy as they pore over an estimated 40,000 sex-specific legal references at taxpayer expense in their attempt to diligently un-gender them. Democratic State Senator Jeanne Kohl-Welles, who sponsored the 474-page bill, appears to be rather gender-neutral herself”sorry, “itself.”

“For the sake of fairness and equity, will herpes change its name to hisorherpes?”

“This was a much larger effort than I had envisioned,” Welles (I’ll use only her ex-husband’s surname just to be difficult) told Reuters. “Mankind means man and woman….There’s no good reason for keeping our legal terms anachronistic and with words that do not respect our current contemporary times,” she he it said.

“Words matter,” commented Liz Watson of the National Women’s Law Center regarding Washington’s move to neuter its legal jargon. “This is important in changing hearts and minds,” and we all know that changing hearts and minds is far more important than, oh, balancing the budget, lowering taxes, or easing unemployment. At press time, it remains uncertain whether Watson’s heart and mind had changed enough to change her surname to Watdaughter or Watchild, nor whether the organization she represents will switch its name to the National Person’s Law Center.

That’s the problem with tiny moments. Unless you trample them underfoot immediately, they blossom into big movements.

But the movement’s been growing for decades in the halls of academia and the corridors of power. “You can get people to change their language,” claims Amy Sheldon, a gender-neutral-looking professor from the University of Minnesota. “It doesn’t automatically change whether people are acting sexistly and non-sexistly.”

Tell ya what, Amy”you can try to get people to “change their language” until dream-catchers magically emerge from your armpits, but you’ll only get me to use the word “sexistly” when you pry it from my cold, dead lips.

The website to Sarah Lawrence College“which, if I’m not mistaken, was named after a chick”offers “Gender Neutral Language Guidelines” that provide a frightening glimpse into the latter-day leftist tendency to get everything backward. Their handy how-to manual accepts the term “gendered” as a verb, as if sexual dimorphism is a diaphanous social construct and one actually has to inject gender into the language, yet it frowns upon “transgendered” in favor of “transgender,” as if to imply that these self-mutilating freaks were born that way.

MIT offers a guide for removing the word “man” from everything except, oh but of course, the word “manslaughter.”