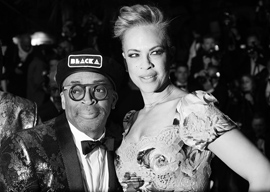 This disgraceful unanimity is more craven than even last winter’s unhinged hosannas for Black Panther. That at least was a fair to middling film, while BlacKkKlansman is a junky movie distinguished mostly by Spike’s abiding hatred for white women, which traces back to his fury at his white stepmother.

The other amusing aspect of BlacKkKlansman, a 1970s period drama about a black undercover cop with an immense Afro, is that it comes pre-parodied by the 2002 Eddie Griffin comedy Undercover Brother, which was directed by Spike’s less overpublicized cousin Malcolm D. Lee.

You could imagine that Undercover Brother was intended as an unkind satire on BlacKkKlansman, except that it came out sixteen years earlier. Perhaps old family reunions had given cousin Malcolm a preview of Spike’s enduring phobias and fixations?

Yet Spike’s new movie is being praised extravagantly for daring to denounce hate, with its release timed to coincide with the first anniversary of Charlottesville. Of course, hiring Spike Lee, a reactionary racist, to castigate hate is a little ironic because he is the finest hater in American cinema.

Unfortunately, the Great Black Hope of the 1980s long ago stopped being much good at anything besides racial rage.

This biopic is loosely based on the true, but stupid, story of a black policeman in 1970s Colorado Springs (of all places) who “infiltrated” the local Ku Klux Klan by calling the leader on the telephone and shooting the breeze with him. He later phoned national Grand Wizard David Duke and kicked things around with him, too.

When first contacting the Klan, the black cop idiotically gave his real name. So when the lonely Kolorado Springs Kleagle invited him to drop by, he had to enlist a white cop to go hang out with the Klavern under his name.

Only once did it occur to the KKK that their new recruit had a different voice in person than he did on the phone. But the white mole blamed it on his sinuses, so they were reassured. After nine months of nothing much happening, the police chief called off the operation with no arrests made.

This might be the most boring true story ever filmed.

“Hiring Spike Lee to castigate hate is a little ironic because he is the finest hater in American cinema.”

Except…that the Democrats’ Coalition of the Margins needs its KKKrazy Glue of everybody hating the white man to distract its diverse components from fratricidal infighting. Therefore, 21st-century Americans have been indoctrinated into fearing that the KKK is under every bed, even though it’s been close to a wholly owned subsidiary of the FBI for over a half century.

Hence, BlacKkKlansman comes presold to audiences. Why spend $130 million making a giant prehistoric shark movie when for $15 million you can earn one-fourth the box office just by scaring the crowd with white guys in hoods?

Still, to inject some incident into this quite long movie, Spike and his co-writers concocted a subplot about a rogue KKK splinter group firebombing the right-on radicals of the Black Student Union at Colorado College. This is a rich kids’ school for future ski bums, incongruously enough, but Spike is a third-generation Morehouse grad, so he identifies with well-heeled private college students.

Being Spike, he had to make the invented terrorism story line conform to his well-worn obsessions. At age 61, the former enfant terrible believes some white men are potentially redeemable. The races might be able to get along, but only if the noble black man does not surrender to the conniving white woman his precious bodily fluids. Or something.

After Spike’s mom died, his dad, prominent jazz musician Bill Lee, moved in with a white woman, which rankles Spike to no end. “My mother wasn’t even cold in her grave,” he complained. He has never forgiven the entire race/sex.

Soon after his 1991 movie Jungle Fever, which his father saw as a personal attack on his second marriage, Spike outlined his one-man campaign against miscegenation: “I give interracial couples a look. Daggers. They get uncomfortable when they see me on the street.”

For Spike, after all these years, the love of Beckys remains the root of all evil. Thus he takes this opportunity to instruct his latest audience in the true nature of white women by making the real villain in BlacKkKlansman not the homicidally racist KKK second-in-command, but his fat, stupid wife.

Hatred of white women is suddenly fashionable, so Spike is back in style.

Not surprisingly, Spike, a New York homeboy, is completely defeated at offering any sense of Colorado authenticity. This is partly because he doesn’t give a damn about some John Denver state, and partly because he filmed much of the movie in Ossining, N.Y., just up the river from New York City.

After all, you could hardly expect Spike to transplant himself for long to Colorado. What if Carmelo Anthony had a triple-double at Madison Square Garden and Spike wasn’t in the front row? What if some Coloradoan gave him a pizza slice that he couldn’t fold?

Another of Spike’s tics is nepotism, such as casting his sister Joie Lee in eight of his movies.

Back when Spike’s career was on its long-lost upward trajectory, he had his father compose the fine scores for his first four movies. But they clashed over Spike’s anti-stepmother Jungle Fever, and then his father got caught with heroin. (My vague impression is that Spike is a straight arrow who despises drugs.) Spike permanently replaced his father, who is still alive at 90, with Terence Blanchard.

My idiosyncratic theory for why Spike’s career never attained the heights that everyone once expected is that his switch to Blanchard (whose scores drive me up the wall) debilitated his moviemaking subtly but profoundly.

Or maybe Spike never was all that good, but back in the 1980s the whole world just wanted a talented black auteur so much that we overlooked his shortcomings?

Keeping with his nepotistic ways, he’s assembled for BlacKkKlansman a cast of famous names: Turturro, Buscemi, and Washington. Unfortunately, his supporting actors consist not of the Brooklyn-born Italian-American character greats John Turturro and Steve Buscemi, but of their brothers Nicholas and Michael, respectively. (What these Brooklyn-accented paisans are doing in the Colorado Springs police department and Klan is left unexplained.)

Fortunately, Spike does employ one competent TV actor, Topher Grace of That ’70s Show, as David Duke, and one professional movie star, Adam Driver, as the white cop who actually meets the KKK in person. Driver, who plays Darth Vader Jr. in the ongoing Star Wars whoop-de-dos, manages to single-handedly lift the movie into mediocrity whenever he’s on screen. But we’ve seen it all before in better undercover-cop movies, such as The Departed, Donnie Brasco, and Naked Gun 33 1/3.

One uncharacteristic aspect for a Spike Lee movie is how pro-Semitic BlacKkKlansman is. That’s because the production was originally developed not by Spike, but by QC and Blumhouse. They brought to Spike an early version of the screenplay by David Rabinowitz and Charlie Wachtel.

Driver’s true-life character was made Jewish to facilitate countless references to how blacks and Jews are inseparable allies in the War on Hateful Whiteness. (In case you are wondering, the unusual-looking Driver is a Baptist from Indiana who enlisted in the Marines in response to 9/11.)

BlacKkKlansman is in stark contrast to the career-derailing controversy over Spike’s 1990 movie Mo’ Better Blues, in which the Turturro brothers play stereotypical greedy Jewish nightclub owners who rip off black musicians. Spike was denounced at length in The New York Times as an anti-Semite and had to pen a humiliating yes-I’ve-stopped-beating-my-wife op-ed entitled “I Am Not an Anti-Semite.”

Lee says there is “a law you cannot have any Jewish person who is not a hundred percent honest” in a film, “because if they are not, you’re anti-Semitic and perpetuating stereotypes.”…

And the truth is, he’s not sorry about portraying Moe and Josh Flatbush as Jewish bloodsuckers, feeding off the talents of black musicians…. “How is that being stereotypical? For me, that’s like saying, like the NBA is predominantly black. Now, if that makes me anti-Semitic…”

This brouhaha couldn’t have done his career much good. When the studio threatened to take away his 1992 magnum opus Malcolm X citing minor budget overruns, he had to finish using donations from rich African-Americans such as Bill Cosby and Michael Jordan. The Academy Awards snubbed Spike, with only Denzel Washington and his costume designer even being nominated.

Undercover Brother: “So the conspiracies we’ve believed for all these years are true? The NBA really did institute the three-point shot to give white boys a chance?”

Undercover Brother: “Then the entertainment industry really is out to get Spike Lee?”

Undercover Brother: “Then O.J. really didn’t do it?”

[Everyone looks away and mumbles]