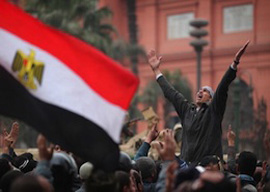 It began when Mohamed Bouazizi, a twenty-six-year-old fruit seller, set himself alight last December 17th in provincial Tunisia. Bouazizi was not demanding fair elections, free speech, equitable wealth distribution, or free medical care. All he wanted was to support his siblings and widowed mother. Selling fruit and vegetables from a barrow in the streets of Sidi Bouzid was the best he could do. The police seized his produce cart, and a policewoman reportedly joined in publicly beating him. The loss of honor and livelihood led to his public suicide, a death that ultimately achieved more than a hundred suicide bombings against innocent civilians ever did. At his funeral, five thousand mourners chanted, “Farewell, Mohamed, we will avenge you.” And avenge him they did, overthrowing the president who had overseen the profound injustice that led to his death and giving hope to the dispossessed everywhere.

Who knew that one young man’s self-immolation would set the Middle East on fire? Tunisia and Egypt’s presidents have fled. Sheikhs in Bahrain and presidents in Algeria and Sudan live in fear of their populations and are answering their demands with violence. The germ of rebellion is infecting monarchies and republics alike. Its force has been felt in American client states such as Tunisia, Egypt, and Bahrain, but anti-imperial Iran is not immune. Arab states may have been the first affected, but Persian Iran, Kurdish northern Iraq, and Somali-speaking Djibouti are witnessing the same clashes between street demonstrators and security forces that toppled the regimes in Cairo and Tunis. People have, for the moment at least, lost their fear.

“Bliss was it in that dawn to be alive,” as Wordsworth famously wrote of the French Revolution’s enthusiasts, “But to be young was very heaven!” And heaven it must be for the young in Egypt, Tunisia, Libya, Yemen, Algeria, Iran, Iraq, Bahrain, and everywhere else they are striking fear into their aged and corrupt rulers.

Estimating the breadth of discontent will be mere speculation until the dust settles and the participants reflect (hopefully not in prison) on their motives. Libya is a secular military and Arab state, while Iran is a Persian theocracy. Despite the structural differences between the sparsely populated desert dictatorship and an ancient civilization’s populous center, citizens in both nations are demanding the same things: liberty, fairness, a say in their governance, and a share of the wealth. And they are facing the state’s guns and torture chambers to do it.

“People have, for the moment at least, lost their fear.”

History’s precedents are not necessarily hopeful. In 1989, Eastern Europe and Central Asia disposed of communist rule and soon fell to oligarchs and martinets. Apart from oil, their main exports became poor women forced into prostitution and refugees seeking work. Going back a little further, the Middle East in the 1920s and intermittently in the 1930s saw almost every Arab population rebelling against colonial rule by France, Great Britain, and Italy. In Europe immediately before that, post-Great War revolutions produced fascism, Bolshevism, and, ultimately, another war.

The flowering of rebellion from Morocco to Iran resembles nothing so much as Europe’s myriad revolutions in 1848. These revolutionaries had little in common with one another beyond a dissatisfaction with the status quo, but they shared the goals of universal (male) suffrage, freedom of speech, and the end of feudal landholders who reduced peasants to rent slaves. In February 1848, an eighteen-year-old student named Carl Schurz was writing a tragic drama in Bonn when someone ran into his room and exclaimed, “What, you sitting here! Do you not know what has happened?”