Spiritual But Not Religious, Just Inane 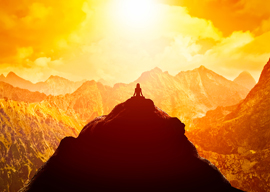 NEW YORK—“I’m spiritual but not religious.”

Why do people say this?

Yes, we know you’re spiritual. Everybody is spiritual. Mafia hitmen are spiritual. We’re all made up of body, soul, and spirit. So why are you telling me about it?

But wait! There’s actually a Wikipedia entry called “Spirituality,” so maybe some spiritual-but-not-religious Ph.D.s from Jonathan Livingston Seagull University have been posting there.

Nope, not helpful. According to the article, spirituality can involve:

(1) seeking the image of God.
(2) seeking the image of God in man.
(3) seeking the “deepest values and meanings by which people live.”
(4) belief in the supernatural.
(5) belief in personal growth.
(6) quest for ultimate meaning.
(7) quest for sacred meaning.
(8) religious experience. (How did this one get in there?)
(9) encountering one’s own inner dimension. (No idea what that means, but you can encounter a lot of your inner dimension with a few Pabst Blue Ribbons.)

There are, in fact, at least 27 definitions of “spirituality” in the academic literature, so if we were being scientific about it, we would conclude that the word itself is a meaningless basket term that can be manipulated to signify anything or nothing.

So let me go back to my original question:

Why do people feel the need to say “I’m spiritual but not religious”?

Maybe we’re focusing on the wrong word. Maybe it’s the “not religious” part they want us to hear.

Except you could say you’re not religious without adding the “spiritual” thing and confusing the heck out of us. Not Religious is a good thing to be. It’s easy. It’s succinct. It’s the official doctrine of many political parties, including the Communists. It’s a way to say “I’m not concerned with God, churches, synagogues, mosques, temples, monasteries, or Holy Writ. I’m going it alone.”

So just leave “spiritual” out of it.

We have to know how spiritual they are.

Fortunately we have some guideposts provided by Tara Burton, a writer for Vox who recently reported the results of a study conducted by something called the Public Religion Research Institute, which, upon cursory examination, is a think-tanky D.C. polling organization founded in 2009 by an Emory University professor who believes that “white Christianity” is dead. The “nonpartisan” PRRI is dedicated, according to its website, to “illuminating America’s changing cultural, religious, and political landscape.” Apparently this includes a lot of spiritual non-religion.

So their latest illumination is a poll showing that 20 percent of Americans are Spiritual But Not Religious.

Yes, it’s no longer a bromide or something your eccentric aunt says, it’s an actual category in the poll.

Since we can’t possibly know what that means (see above), Tara Burton has done us the favor of seeking out some representative Spiritual-But-Not-Religious worshippers: