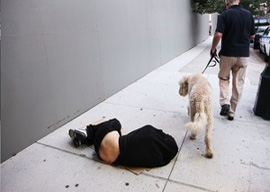 I have a new slogan for Obama: Spread the Poverty! We are told that more people now live below the poverty line than ever. But who sets the line? Like we don’t know the answer to that.

Government bureaucrats set the lines on everything. That’s their specialty. The government defines you and assigns you a box. Then government does everything it can to keep you in the box, where you are convenient and most importantly predictable.

This is why the government keeps data on things such as ethnicity, religion, gender, and income. You never know when you need to use that data to let people know how bad they have it.

If you have a BMI of 25, you are overweight, but at 24.9 you are not? If $10,890 is poor, it’s obvious that one extra dollar makes you suddenly not poor, at least according to government logic.

How silly. It’s like saying, “I’m 49 and a half.” But it’s no surprise that the government treats us like we’re stupid. They’ve earned that right, because for the most part America is too stupid to realize that things such as rich, poor, fat, and thin are mostly a state of mind.

“The individual defines what’s rich and poor, and government can’t stand the individual.”

If you have a BMI of 27 and you feel good, who cares what the government thinks? The same is true in evaluating rich and poor. Wealth is a state of mind. Rich and poor are dictated by lifestyle choices, not numbers. Some people make a small amount of money but live like kings. Then there are those who earn outrageous incomes but are one house payment from financial devastation.

The individual defines what’s rich and poor, and government can’t stand the individual. The individual refuses to live in the box or be some neatly wrapped predictable package such as “poor.”

This new report on poverty is supposed to tell us that poverty is problematic. I disagree. America’s poverty problem is its definition of poverty. After that, the next problem is liberal politicians’ fascination with rewarding poverty.

There are far too many corrupt poor, i.e., the poor who take advantage of American taxpayers. Any system that creates more of them is the problem.