Springsteen’s Promise: Brightness on the Edge of the Horizon 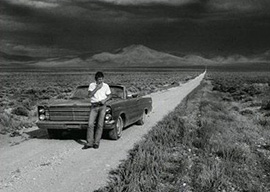 I agree with other reviewers that Bruce Springsteen’s album The Promise is incendiary. I mean, Jesus H., has there ever been another collection of artistic work culled together from the cutting-room floor that could be universally hailed as a masterpiece? It’s like walking into a garage sale and finding a recording of Rolling Stones songs cut from Let It Bleed that didn”t fit onto Sticky Fingers. But better. Recorded in the late 70s, it shows Bruce’s experience had finally caught up to his youthful exuberance and he was working at the height of his creativity. This whole record is, like Q-tipping after a shower, an earful of joy.

Great artists often have their finger on the pulse of culture long before the public, so it’s no accident Bruce released this new/old material now. (OK, well, the box set’s also going to make a great Christmas gift.)

For the uninitiated, let’s give the album some context:

After the success of 1975’s Born to Run (he simultaneously graced both TIME and Newsweek‘s covers), Bruce wasn”t about to become a one-hit wonder. He began to work on his follow-up but was caught in a recording-contract clusterjam that resulted in all of Bruce’s earnings from his recorded material being direct-deposited to his manager’s bank account. Nice. So after his hard and well-earned watershed moment, he couldn”t record music, but he could write it. So to keep himself in the black, he wrote and sold songs such as “Because the Night” to Patti Smith and “Fire” to The Pointer Sisters.

“The Promise is an aural time capsule to a brighter period in this country’s history.”

When the fiasco cleared, Bruce and the E Street Band finally put out Darkness on the Edge of Town in 1978. People were expecting an anthemic, Brill Building follow-up to Born to Run, but what arrived instead was tough music for tough times, with themes of lost innocence, austerity, anger, and defiance.

The Promise is comprised of songs Bruce didn”t use on that album”not because they were lesser works. You could argue that some are superior. It’s just that Darkness was consciously crafted to evoke a specific feeling. But in cutting these songs from Darkness, Bruce stored an amazing album on a shelf. Until now.

Many of The Promise‘s dusted-off tracks are “classic” Bruce”upbeat, soaring, and optimistic”which is why they couldn”t work on Darkness. Listening to the album reminds me of spending summers in the 1980s near Asbury Park, NJ, where Bruce got his start.