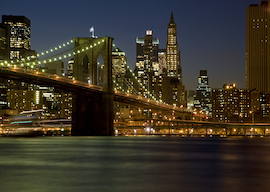 NEW YORK—In the dark she still looks good. The mystery and magnetism linger until dawn, and then you slowly see the lines and the harshness. Like a lady of the night who has smoked 10,000 cigarettes, the coming of the light is the enemy. New York ain’t what she used to be, that’s for sure. She’s a tired old place, with the upper-class vertical living gone to seed, and the honky-tonk fun side of the city gentrified and made boring. Michael Bloomberg as mayor did his best to ruin the glamour of the city, allowing glass behemoths to make the Chrysler Building, one of the world’s monuments to architectural brilliance, be buried amidst glass monstrosities. Bloomberg was and is a lowlife who knows how to count to 50 billion but couldn’t tell you Admiral Nelson’s Christian name if his miserable life depended on it. The present mayor, de Blasio, is a lowlife wop without the billions.

What happens in the sky is felt in the streets below. The once-exclusive Vanderbilt Avenue, where stores sold expensive tennis gear and hunting shotguns, is now a dark and dreary place, and just as well. The Vanderbilt was the hotel where the swells met—under the clock—since before Fitzgerald’s time and long past Taki’s. It was gone with the wind when Bloomberg types descended on the city like the northern jackals who went down south.

The tens of millions of tourists who come to the city have turned the place into Disneyland, with thousands upon thousands of obese men and women staring openmouthed at Trump Tower or Grand Central. Food vendors shunt people into the streets, Bengali taxi drivers honk their horns as if back home, and gumshoe cops are as rarely seen as the fuzz is in London town. No one walks the beat anymore, not even the hookers. Grand Central Terminal opened more than a century ago, and it is still the most beautiful railroad station ever. It was a welcoming public palace, and more movies were shot about heartbroken couples in Grand Central than CNN and The New York Times have broadcast and published false news. The vast, vaunted hall was a place anyone could visit, its inclusive grandeur welcoming the poorest and the richest. No longer. The man in the gray flannel suit who used it twice per business day no longer travels; he works on his computer at his suburban home. The gray-flannel-suit man of ’50s renown has been replaced by the hustler, the professional beggar, and the thug looking for trouble.

“No one walks the beat anymore, not even the hookers.”

Park Avenue has been rezoned, but its buildings are still stately and expensive. It’s the people who live in them that are the problem. They are very rich, but their manners are those of the carpetbagger. And they look even worse. No one wears suits or dresses nowadays. Men wear jeans and trainers, and women wear leggings. Oh yes, I almost forgot, no one speaks English anymore—in the street, that is, and I live on Park Avenue and 70th. Immigration from the southern part of the Americas began in earnest in 1965 and is now in full flow. Whites are a minority in the city, and most likely also in the state. Unlike the immigrant of times past who yearned to learn the language, these ones no speaka da Inglis. They don’t even try. Even my housekeeper, Margarita, who has been with me forty years, does not speak a word of you-know-what. There are Spanish channels on television, and every telephone message instructs one to push a button for Spanish. A large part of the police force is Hispanic, and the largest of the criminal gangs operating in the city are Dominican and Puerto Rican. Black New Yorkers have lost control of the heroin trade to Hispanics, but the black community is the largest recipient of that foul and evil drug.

New York used to be a sprawling Hopper painting: grand, sometimes melancholy, but golden. Newsstands and candy stores, diners and cinema palaces mixed headily with red-hued apartment houses laced with fire escapes. Beaux arts town houses and elegant co-ops lined the avenues on the Upper East and West Sides. Over the years the luncheonettes and candy stores came tumbling down, replaced by condos and office towers. It’s called progress. The longer one lives in New York, the more one loves the vanished city. It’s the same in London, but not Paris or Rome.

Fifty years ago last week, Aristotle Socrates Onassis married the most famous widow in the world, Jackie Kennedy, on Skorpios, his private island in the Ionian. The island is now owned by a Russian oligarch who keeps people out with dire warning signs on the beaches. I thought of Jackie last week as I passed 998 Fifth Avenue. 998 was developed by Jackie’s maternal grandfather in 1912. No one remembers Ari and Jackie anymore, nor does anyone notice 998 in particular. It is par for the course. Tall, slender, and glassy is the style nowadays, and I for one hate it, hate it, hate it. New York, New York, once upon a time a hell of a town.