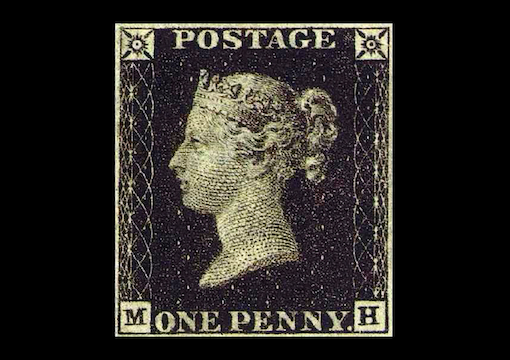 Every month when I am in England, I have lunch with an old friend in a restaurant about equidistant from our two homes, that is to say about fifty miles from each. The food is good, but I have a secret and rather peculiar additional reason for liking the restaurant. I like its men’s lavatory.

Above its urinals is wallpaper whose pattern consists of hundreds of Penny Black stamps. The Penny Black was the first postage stamp in the world ever printed, dating from 1840. When I was in my stamp-collecting phase—I think it followed the dinosaur phase, but it might have been the other way round—I held the Penny Black almost in religious veneration and it was my ambition to own one. I never achieved my ambition, however, for the Penny Black was always much more expensive than its successor, the Penny Red, of which I had several, and my pocket money was insufficient for the Black. Oddly enough, the words “Penny Black” still cause me a frisson, though I haven’t collected stamps for more than sixty years.

I enjoy relieving myself in (or should I say at?) the restaurant because I like to examine the wallpaper above the urinals. I have to relieve myself first because I have reached the age at which it is impossible for me to urinate and concentrate on something else at the same time. Once finished, however, I am free to examine the Penny Blacks at my leisure, apart from the time constraint because of the others at my table who are waiting for me.

“It seems to me that one of the paths to happiness open to men is an obsessional interest in something.”

For the information of those who never collected stamps (entirely a masculine hobby), the Penny Black was of a simple but brilliant design, essentially a black background with a profile bust of Queen Victoria in the twelfth year of her reign. But the simplicity of the design is deceptive, and viewed closer up there are, if not quite an infinite, at least a very large number of variations; so large, in fact, that one could devote one’s life to the study of them.

A great deal hangs on these variations. By great deal, of course, I mean the price attached to the various specimens. When I looked up “Penny Black” on Google, I was immediately offered a block of twelve unused such stamps for nearly $700,000 (but the postage was generously included in the price). Nearly 69,000,000 Penny Blacks were printed and an estimated 2 percent of them have survived to this day. They were printed from different plates so that the resultant stamps differed subtly. The sheets of Penny Blacks were not perforated, so that they had to be cut with scissors and those with clear margins are now worth much more to collectors than those more carelessly cut and left without margins. There is also the matter of the cancellation or franking to be considered, which is another study in itself. Whole guides to the Penny Black have been written.

No doubt the learning or erudition that attaches to Penny Blacks will seem arcane and even foolish to non-philatelists, especially to those who never succumbed in their childhood to the attraction of postage stamps. (Do children still collect stamps, I wonder?) My point, however, is that those who can immerse themselves in the arcana of some minute corner of the universe such as the Penny Black, and become expert in them, excite not my contempt because of the triviality of their subject, but rather my envy, for it seems to me that one of the paths to happiness open to men (particularly men) is precisely an obsessional interest in something. It is by this obsessional interest that the disappointments, daily worries, and chagrins of daily existence can be kept at bay. The world about may be collapsing, but there is always the consolation of their obsessional interest.

But surely, some might say, it is incumbent on obsessives at least to obsess about something important and not as fundamentally unimportant as the Penny Black. Here I remember Somerset Maugham’s short story “The Book Bag.” The story opens:

Some people read for instruction, which is praiseworthy, and some for pleasure, which is innocent, but not a few read from habit, and I suppose that this is neither innocent nor praiseworthy. Of that lamentable company am I.

I too am of this company, and like Maugham would rather read a train timetable than nothing at all. (What would I have been like before the invention of print, I wonder? Probably pretty short-lived.) Maugham goes on correctly to observe that readers tend to fancy themselves superior to nonreaders, but then asks:

From the standpoint of what eternity is it better to have read a thousand books than to have ploughed a million furrows?

If it is true that eternity is no more interested in us than is an elephant, say, when it treads on an ant, it matters not a fig (to eternity) whether our obsession be Penny Blacks or anything else. But the very concept of mattering implies a subject as well as an object. If there were no subjects in the universe, nothing could matter; but there are subjects in the universe, namely us (at the very least), so that there is something that matters, though it need not be—in fact, is not—the same thing that matters to all subjects.

Generally, people look down on philatelists. The great physicist Sir Ernest Rutherford once said that all science is either physics or stamp collecting, and clearly he did not think very much of the latter. But the world needs all kinds of people, not just scientists; it needs its obsessives as well as its imaginative thinkers. I fall somewhere in between the two: not patient enough for the former, not clever enough for the latter. As I have said, I don’t so much admire philatelists who excite themselves over the minutiae of their little rectangles, squares, and triangles of paper, as envy them. Their method of distancing themselves from the woes of the world is both effective and harmless, an achievement indeed.