Stand Up and Say You’re Sorry 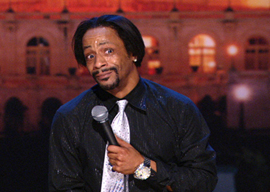 Here’s how I know the West is doomed.

Yeah, the replacement rate is under 2.1 and Chaz Bono is on Dancing With the Stars.

But here’s the real reason:

I heard this all my life, and so did you:

Dictators can bear anything except mockery. Like court jesters of old(e), stand-up comedians are fearless truth-tellers, saying out loud what we’re all secretly thinking and getting away with it—maybe even changing the world! Charlie Chaplin! Lenny Bruce!! George Carlin!!!

“If y’all had California and you loved it, then you shouldn’t have gave that motherf***er up, bitches!”

Someone yelled, “This IS Mexico, motherf***er!”

And so began a six-minute Mexican standoff, with Williams berating the heckler, chanting “U-S-A!” and singing “The Star-Spangled Banner.”

“Do you remember when white people used to say, ‘Go back to Africa,’ and we had to tell them we don’t want to?” Katt yelled as the audience whooped its approval. “So if you love Mexico, bitch, get the f*** over there!”

LaughSpin asked whether Williams had acted “patriotic or just racist” with the cloying concern-troll earnestness that’s standard issue at (of all places) websites run by and for comedians. Every week, these sites cover some controversy involving a stand-up and an aggrieved (insert minority group) audience member. I need to remind myself I’m reading Splitsider instead of a Seven Sisters student paper, what with all the hand-wringing about “homophobia,” “misogyny,” “date rape,” and whether or not certain jokes are “appropriate” or “go too far.”

In short, even professional comedians and their fans have embraced the elites’ “eat your (organic) spinach” ethos. I thought everyone understood that those “You know what? I’ve learned something today…” codas on South Park were goofs on the cringeworthy “very special episodes” that once propped up faltering sitcoms. The ribald “poker scene” from Louie is every hipster’s new favorite thing because it features a somber, chilling (and highly inaccurate) etymology of the word “faggot”—not in spite of it.

There were over one hundred news stories about Katt Williams last week according to Google, but only one speculated about his rant’s possible—what’s that expression they like?—“root causes.” (Yeah: me.)