Standing Up to the Oligarchs 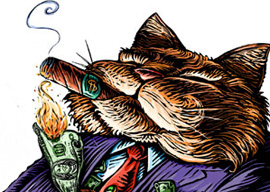 Much ink has been spilled scapegoating the various newfangled nerdy types known as “quants“ for the financial apocalypse. As a journeyman member of the breed, I”m considerably dismayed. As I see it, a bunch of Ivy League banker morons are blaming their misdeeds on the quiet boffins fiddling in the corner with their slide rules. We’ve heard plenty from the perfumed princes of the plutocracy, a caste which presently seems to own all three government branches. Perhaps it’s time we heard a few ideas from the tall-forehead set. Quants are people who think outside of the box; their solutions to problems are often elegant and obvious”the type of thing which would never occur to a banker.

Since I know a lot of quants, both from my day job and from my blog, I’ll abuse my privileges as a scribbler and shamelessly tout two good ideas. In the interest of full disclosure, I’ll note that the ideas” originators have dangled before me the princely bribe of offering to buy me lunch. They did so before I wrote this, so my choice of their ideas is honest. I’m not looking for a job. These guys can’t help me with my business, nor do any of them particularly share any of my political ideals: Their ideas simply make sense to me. This is a guarantee you can’t get from any of the other ideas being floated out there. Politicians are always looking to line their pockets and increase their power. Most of the ideas that get into the public eye, from the recent disgusting “healthcare reform” (brought to you, more or less, by the AMA and insurance companies) to the moral panic over “high-frequency trading” (brought to you by people with a vested interest in keeping trading inefficient) are actually carefully crafted messages paid for by people with skin in the game. These two good ideas are from honest men who only want to see things work better.

The first idea is by David Kane of Kane Capital Management. It is an actual SEC proposal submitted before the financial crisis but which addresses a root cause of America’s financial woes. The idea is as follows:

The SEC should pass a regulation requiring that all publicly traded companies allow their shareholders to vote on the following (binding) resolution each year.

“The total compensation of both the CEO and the CFO shall not exceed $1 million in the coming fiscal year….”

Some would say that this plan won”t work since the companies whose shareholders agree to pay more than $1 million per year (whether they be public or private companies) will snap up all the “best” executive talent. Maybe. But, our ability to measure executive talent is so limited that it would be hard for any company to easily identify a CEO candidate who is significantly better than many other candidates for the job.

I can see some of you shifting uncomfortably in your seats. Is this Locklin character some kind of communist? Nothing of the sort. Most modern corporations are not managed as they were intended. These days, it is normal for high-flying CEOs to obtain tens or hundreds of millions in compensation from corporations they had nothing to do with creating simply because they’re connected enough with board members to land the “job.” At best, these privileged bozos act as a sort of success totem or celebrity. Look at Carol Bartz of Yahoo!, an overprivileged, EEOC-trophy dunderhead who managed to…I don’t know what this brittle chiseler did for Yahoo!’s shareholders. She fired a lot of people and isn”t Jerry Yang, and that’s apparently worth $39 million.

“I can tell you one thing: Nobody wanted their tax dollars to fund the bailout of wealthy bankers who immediately awarded themselves giant bonuses.”

Kane’s rule would make clowns such as Bartz more accountable to shareholders, who are generally asleep at the wheel. It would also tend to lower executive salaries across the board. What CEO is going to want cronies who make more money than them? Finally, if a CEO exists who is really worth more than a million a year, shareholders can vote for him to be justly compensated.

This rule does nothing to privately held companies. It does nothing to entrepreneurs who found their own companies. In fact, it encourages these alleged organizational geniuses to start a company which actually proves their merits. If you’re a CEO worth $100 million a year and can only get $1 million running an already existing publicly traded company, you’ll be that much more inclined to found a new company, thus creating wealth and jobs for the nation. People lose sight of the fact that publicly traded companies do not exist to generate wealth for their executives; they exist to create wealth for the public who owns them. The disgusting oligarchy that has ruined our great corporations with excessive debt, outsourcing, and short-term thinking would be given the pay cut they so richly deserve, and the proceeds would be handed out to the people for whom they were intended: the widows and orphans who own shares in the company.