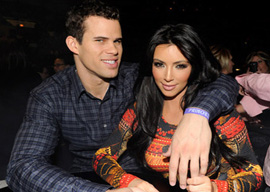 Who’s easier to mock”athletes or celebrities? It’s a neck-and-neck race, each one stretching to be more idiotic than the other. When celebrities and athletes come together, they multiply one another’s idiocy.

Consider Kim Kardashian and Kris Humphries, also known as KK&K. We will assume she is a celebrity, though she might be more accurately classified as a celebutard. He is an NBA player who is roughly ten feet taller than her and is now demanding money from a joint account they shared prior to the end of their 72-day marriage. He signed an ironclad pre-nup whereby he would not be entitled to one cent of her earnings. But now he is asking for an annulment and $7 million. Oy vey!

If not Kim K. & Kris, who gets this week’s Gold Medal for folly? Here are our candidates from the past week’s tabloid headlines….

Kill Bill actor Michael Madsen was arrested in Malibu over the weekend and held on $100,000 bail because of a domestic dispute with his son. The actor looked a bit too blond and worse for wear, which is surely a great disappointment to his Thelma & Louise fans. What is it with these Malibu dads? Gibson, Nolte, Downey, and Sheen come to mind.

The third time is not always charming. Dennis Quaid‘s wife Kimberly has recently filed for divorce. This will be the third split for Quaid, who was previously married to Meg Ryan. Is Quaid back on the sauce or just an insane actor? Probably both. How long before he’s engaged again? I give it five minutes. Ten, tops.

They never learn. Halle Berry and French actor Olivier Martinez have confirmed their engagement. This will be the third marriage for Berry, who has a long list of failed relationships behind her, including her most recent with her baby daddy Gabriel Aubry, a Canadian male model with anger-management issues.

Surely another baby is on the way for father of six Jude Law and his new girlfriend, seen taking a walk in Venice Beach recently. Jude, please get a stylist and a vasectomy. You look like a circus performer. Why do women still have sex with this clown? Who said women are smarter than men?

Former Mets outfielder Lenny Dykstra was convicted of felony grand theft auto and sentenced to three years in prison. He also owes the IRS nearly $30K. He has filed for bankruptcy, spent time in a sober living facility, and was accused of indecent exposure. Talk about batting a thousand. Maybe Dykstra’s dyslexic. Or may he’s a little like Lennie from Of Mice and Men.