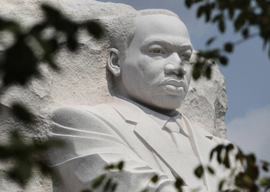 To begin with, it’s white.

In an era when “‘black hole’ is the new ‘niggardly’,” you’d think that particular objection to the new Martin Luther King, Jr. statue in Washington, DC would come up more often.

The focal point of a $120-million memorial, this 30-foot-tall marble figure was scheduled to be unveiled on the 48th anniversary of King’s “I Have a Dream” speech, which he delivered at the nearby Lincoln Memorial (the MLK statue is 11 feet taller than that iconic seated Lincoln), but the unveiling was postponed due to Hurricane Irene.

No doubt it will also be the only one spared (virtual) destruction in future Hollywood blockbusters. From Earth vs. the Flying Saucers through Independence Day, filmmakers have orchestrated the collapse of the White House and the Washington Monument with palpable glee. (My favorite example is set a ways north: In The Giant Claw, the titular vulture perches atop UN headquarters and takes a bite out of it.) The specter of Al Sharpton bellowing through his bullhorn, “They assassinated Dr. King a second time!” would keep even the most amytal-addicted studio exec up at night.

Given the statue’s size, real-life aliens may conclude that this Martin Luther guy is Earth’s literal “king.” An honest mistake: As King’s deification enters its sixth decade, he remains the only American with a national holiday to his name.

However, while the King statue was spared during last week’s freak earthquake, cracks have developed in the man’s reputation. These flaws are common knowledge on the “right,” yet they are finally being discussed in (almost) mainstream venues, too. This in-your-face memorial feels like a heavy-handed ploy to distract attention from King’s diminishing sainthood—a kind of clumsy left-wing table magic.

We’re not saying that King wasn’t an incredible person who did more to advance the human race than most of us can ever hope to do. We’re just saying that he was also a plagiarizing butthole.

No, American Renaissance wasn’t hijacked by drunken fratboys. That’s an excerpt from a cracked.com article called “5 Great Men Who Built Their Careers on Plagiarism.” OK, so that popular humor site isn’t exactly The New Republic, but what about Mental Floss, an award-winning magazine with a devoted hipster Utne Reader-ship? They’ve covered King’s “borrowings,” too, albeit in a gentler fashion.

These plagiarism “talking points” were once confined to “white supremacist” chat rooms. Today, the topic (as well as King’s serial adultery) is approaching “everybody knows” velocity. Perhaps now someone will ask King’s litigious, avaricious estate why they charge exorbitant licensing fees for the use of his speeches in everything from academic papers to TV commercials if those words never belonged to King in the first place. Helpfully, excerpts from those speeches are carved into the memorial, inadvertently turning it into a monument to intellectual-property theft. (King’s family billed the memorial foundation $800,000 for that privilege.)