Stay out of the Syrian Maelstrom 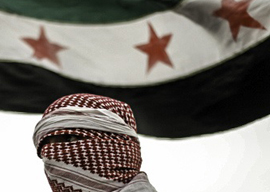 “In Syria, I will work … to identify and organize those members of the opposition who share our values and ensure they obtain the arms they need to defeat Assad’s tanks, helicopters and fighter jets.”

This commitment by Mitt Romney in his VMI address has thrilled the neocons as much as it has unsettled the realists in his camp.

And the reasons for the latter’s alarm are apparent.

Last year, U.S. planes scrambled to defend Benghazi against the “tanks, helicopters and fighter jets” of Col. Gadhafi. Now we are investigating the murders of our ambassador and three Americans in the city we saved.

To bring down helicopters and fighter jets would require U.S. F-16s over Syria or putting surface-to-air missiles in rebel hands. Do we really want to be passing Stingers around a no man’s land where al-Qaida agents could buy up a few to bring down U.S. airliners?

What Romney proposes is an act of war. Before we get into our fourth war in 12 years, let us consider the antagonists.

“If America has a vital interest in this multisided war, that interest is served by staying out, as we have done for its duration.”

This is first a religious war with the Shia regimes—Hezbollah, Iran and the Iraqis we brought to power—lined up behind Syrian President Bashar Assad.

Aligned against are Saudi Arabia and Qatar, who have been sending arms to the rebels, and Turkey, which has allowed the transfer of arms.

Egypt has not gotten involved, but President Mohammed Morsi of the Muslim Brotherhood has demanded that Assad stand down.

Among the rebels fighting Assad, however, are Islamic jihadists from across the Middle East and al-Qaida. And should Assad fall, his successor would likely be a Sunni favorite of the Muslim Brotherhood.

If Damascus falls to the Brotherhood, the Christians Assad sheltered would face the fate of the Copts in Egypt and Christians in Iraq: terror, persecution, expulsion. The Alawites, the Shia minority whence Assad comes, would go to the wall.

There is also an ethnic component to this war. If the regime and state collapse, Syria’s Kurds could emulate their cousins in Iraq and Turkey and unite to fight for a separate Kurdistan in the heart of the Middle East.

Then there are the strategic stakes. If Assad falls, the Shia crescent—Iran, Iraq, Syria, Hezbollah in Lebanon—is severed. Vladimir Putin’s navy, whose last base in the Mediterranean is Tartus on Syria’s coast, would suffer a strategic defeat.