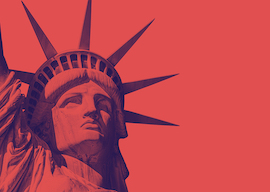 Ten years or so ago Stephen Fry, an English polymath, stage and screen actor, writer, TV personality, and many other things, gave a Spectator-sponsored lecture at the prestigious Royal Geographical Society. The theme was that he would live in America in a heartbeat. I know Stephen and paid extra attention to his speech because I’ve lived between his country and the U.S. for most of my adult life.

His love affair with Uncle Sam began watching “Wagon Train, Rawhide, The Lone Ranger, Lucille Ball, Bewitched, and Dick Van Dyke.” (Fry is in his late 50s or maybe older.) Not with rock & roll, nor Elvis, nor the blues or jazz. “Certainly not Steve McQueen. I have always disliked cool.” What helped him fall in love with America were American actors such as Spencer Tracy, Humphrey Bogart, James Cagney, James Stewart, Cary Grant, Fred Astaire, Bette Davis, Katharine Hepburn, and others like them. But what really turned him into an America lover was a Brit, P.G. Wodehouse, creator of Jeeves, who ended his life as an American citizen. Everything Wodehouse wrote about the energy, vivacity, warmth, welcome, and excitement of America thrilled Fry. (The British class system does not—did not, rather—encourage any of the above.)

Fry then went on to compare a British middle-class (translate that into upper-middle-class in the U.S.) childhood in a drab, early-1960s British world of gray “where everyone wore gray trousers and had gray attitudes, to dripping colorful slacks, sparkling jewels, thrilling cameras, and perfumed furs.” His American cousins would write and tell him that in America they had ice machines and air-conditioning, stereo sets and color television. “Damn it, in Britain even our TV was gray.” Young Stephen would sit and dream about basketball sneakers, yard sales, drive-in movies, spelling bees, and homecoming queens. (When he said that, someone laughed out loud because Stephen is a very gay man.)

Fry’s father was a physicist who was offered tenure at Princeton but refused it because he feared bringing his children up in America. As Stephen put it, “He liked America but was disinclined from having ‘Gee, Dad’ directed at him over breakfast.” I thought that a wonderful touch, British stiff upper lip as opposed to American informality. Fry then went on to decry his dad’s decision because it would have entailed “granola or creamed wheat over hominy grits, the eggs would have been sunny side up or over easy, and maple syrup would have been poured over bacon and sausages.”

Although Fry was born and lived in a large house in Norfolk with gardeners, staff, and a fireplace in every room, he imagined himself as an American, Steve, who was confident, happy, strong, and secure, “in exactly the way that I was unconfident, unhappy, weak, and insecure.” He went on to admit that falling in love with America suggested falling in love with the idea of America, a phrase that makes little sense if one substituted another country for the word “America.” For example, what is the idea of Greece (a bunch of ruins?), of France (lots of garlic and the cancan?), of Britain (warm beer and a vicar on his bike?)? But the idea of America does—or used to, rather—make sense.

According to Fry, America was one huge pile of contradictions, so many of them that space forbids me from even beginning to list them. But I will go back sixty years or so, to when two French intellectuals, Jean-Paul Sartre and Simone de Beauvoir, arrived in America fresh from surviving the German occupation of their homeland. Here’s what they thought of “les Americains”: “There is a myth of freedom and there is the dictatorship of public opinion. Nowhere will anyone find such a discrepancy between myths and men.” La Simone traveling in the South added rather acidly: “Wherever we stop, we can smell hatred in the air: the arrogant hatred of the whites, and the silent hatred of the blacks.”

My, my, how things have changed seventy years on. I visit America twice a year nowadays, and I do agree with Simone—I too feel the hatred, but it’s the other way round. What Americans meant to Fry was their restless DNA that drove capitalism and their hopeful can-do spirit. Their ability to “transform a disappointment into a dollar.” To the two French intellectuals, America was a place where spoiled children hated everyone who didn’t look like them, a place where universities produced linguists, chemists, sociologists, and such but did not train their minds. “As a result, the academic life seemed divorced from the intellectual life of the nation.”

What would be interesting is to have Stephen Fry, who is very much alive, and the two very-much-dead French see America today: a nation where students place nooses around the heads of statues and drag them down and spit on them because they fought for the Confederacy; a place where grim enforcers stalk campuses with baseball bats; a home to universities gripped by a fanatical brand of left-wing identity politics that push policed speech codes and near-total suppression of contrary thought. And where Hollywood actors demand lists of Trump donors in order to bar them from work.

Fry is, and Beauvoir and Sartre were, lefties, but pro-freedom. I wonder what they would think of what the U.S. has become today. It could be the Soviet Union circa 1936. After all, it has its Pravda, The New York Times.