Stephen Hawking: The Gimp Who Would Be God 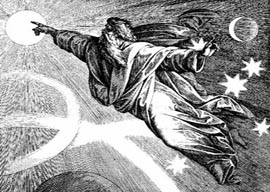 As if it were the center of the frickin” universe, celebrity physicist Stephen Hawking’s new book The Grand Design

rocketed atop the publishing cosmos and reached #1 on Amazon even before its official release date last Tuesday. The book’s speed-of-light ascent was powered mainly by leaked excerpts wherein Hawking and coauthor Leonard Mlodinow assert that the universe can be explained without even inviting God to the party.

This is hardly the first time a world-renowned physicist has suggested that the universe can get along just fine without God. Pierre-Simon Laplace, AKA the “French Newton,” said pretty much the same thing back in 1783. When asked by Napoleon why his theory of the universe’s origins did not mention a creator, Laplace reportedly said, “I had no need of that hypothesis.”

But over twenty years ago in A Brief History of Time

, Hawking still was willing to flirt with God. He postulated that human reason is ultimately capable of arriving at a “complete theory” of all existence, enabling humanoids to “know the mind of God.”

These days, Hawking seems willing”even eager”to erase God from his chalkboard entirely. Earlier this year he declared that “science will win” over religion “because it works.” And in The Grand Design, he and Mlodinow (a Caltech physicist and, amusingly, also a screenwriter for Star Trek: The Next Generation) state:

Because there is a law such as gravity, the Universe can and will create itself from nothing….Spontaneous creation is the reason there is something rather than nothing, why the universe exists, why we exist. It is not necessary to invoke God to light the blue touch paper and set the universe going.

Each universe has many possible histories and many possible states. Only a very few would allow creatures like us to exist. Although we are puny and insignificant on the scale of the cosmos, this makes us in a sense the lords of creation.

There is a cruel, black-hole irony in the fact that Stephen Hawking, the supergenius issuing all these bold proclamations, is very likely at this moment wearing diapers. He at once reminds us of human potential and human limitations.

While researching this article, I was exposed to previously unfamiliar concepts such as dark matter, multiverses, alternate pasts and futures, GÃ¶del’s incompleteness theorem, Pascal’s wager, SchrÃ¶dinger’s cat, redshifts, wormholes, neutrinos, white dwarfs, quarks, neutrinos, and gravitational lenses. I struggled to grasp the basic tenets of string theory and its apparent successor, M-Theory, which posits 11 dimensions, at least two of which I”ll assume are HBO and Showtime. Even beginning to grasp some of these concepts might cause my brain to hemorrhage, so I will defer to Dr. Hawking’s expertise as far as “the maths” are concerned.

Still, there are some gaping God-gaps in the book excerpt I quoted above. Exactly how are the authors defining “God” and “nothing”? Why does Hawking posit God as intervening in the natural process rather than constituting that process? Why refer to M-Theory as science when, by definition, it cannot be tested by the scientific method? And finally, how in fuck’s name does something come from nothing? I thought the famous speculative physicist Billy Preston settled this question back in the seventies when he sang, “Nothin” from nothin” leaves nothin”. You gotta have somethin”.”

There is a cruel, black-hole irony in the fact that Stephen Hawking, the supergenius issuing all these bold proclamations, is very likely at this moment wearing diapers. Hawking at once reminds us of human potential and human limitations. He is considered a peer of Newton and Einstein, yet he has not been able to feed himself or lift himself out of bed since 1974. And I know I”m pushing things into new galaxies of bad taste here, but Stephen Hawking is not exactly what I see when I picture the lord of creation. It seems unimaginably mean to say this, but if Hawking truly had everything figured out, he”d be able to stand up and walk out of his motorized wheelchair. As expansive as his mind is, he seems to be reaching beyond his station in this case. In the end, his arms may be too atrophied to box with God.

Hawking’s entropic physical disintegration has occurred before our very eyes, his body increasingly pounded down with atom-smashing mercilessness. His first wife, Jane, disparaged him as an “all-powerful emperor” yet confessed that it was “difficult…to feel desire for someone with the body of a Holocaust victim and the undeniable needs of an infant.” They divorced in 1990.