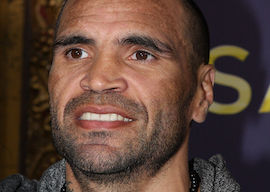 Australian Anthony Mundine is a world champion boxer. Before his move to boxing in 2000, he was one of the most prolific NRL players in the country. He maintains an extensive property portfolio, and currently has a net worth of $30 million. He is a highly respected member of the Australian sports media, and has been featured on numerous television programs.

He is also a figure prone to controversy. He converted to Islam in 1999 and, after the Sept. 11, 2001, terrorist attacks in New York, stated: “They call it an act of terrorism, but if you can understand religion, and our way of life, it’s not about terrorism. It’s about fighting for God’s law, and America’s brought it upon themselves.”

Mundine’s upcoming fight against fellow Australian Jeff Horn, who came to prominence after defeating Filipino boxing legend Manny Pacquiao in 2017, has now been marred by the same controversy surrounding Colin Kaepernick in the United States.

“They’re talking about playing the anthem. If they play the anthem I’m sitting down,” Mundine said. “I can’t stand for that, it’s a white-supremacist song.”

He claims that his upcoming opponent Horn, a rising star in the arena who competed for Australia in the 2012 London Olympics, has only been put on a pedestal because of the color of his skin.

Mundine stated that he and his people are forever being kept down by the white man. “The fight, the plight, the struggle, the constant everyday injustice of indigenous people. It’s got to stop,” he said, before presumably retiring to his $2.6 million eight-bedroom home in Redfern. “We’re getting raped and pillaged in different ways.”

“Instead of being a competition of skill between two athletes, Mundine is attempting to boil the whole bout down to a black-vs.-white racial debate.”

The former NRL star has regularly pointed to his indigenous heritage as the reason he didn’t play more representative football. Before his move to boxing, he was the highest-paid player in the NRL. Surprising that he refers to injustice, when he was being paid significantly more than his fellow white players.

As an Australian myself, there is always a sense of pride when one of my own countrymen succeeds on the world stage, be it sports, entertainment, or media, and Mundine is in this position for a majority of Indigenous Australians. Named the Aboriginal and Torres Strait Islander Person of the Year in 2000, he is the first boxer in history to have had every one of his professional fights broadcast live, and has generated more pay-per-views than any other Australian boxer since he turned professional.

Mundine has enjoyed wealth, success, and opportunity throughout his life. By stating that Jeff Horn is only where he is due to his skin color, he is being deliberately divisive, at a time when race relations in this country are already strained.

“I do feel disrespected and [Horn] is going to face the brunt of that, he’s going to feel the wrath of that,” Mundine said. “I feel sorry for Jeff, he’s the one that’s going to have to cop the hits.”

So apologies, Jeff, you’ve just been roped into Mundine’s fight for equality and justice.

Instead of being a competition of skill between two athletes, Mundine is attempting to boil the whole bout down to a black-vs.-white racial debate. And unfortunately for Horn, this is exactly how it will be viewed by many Australians.

Mundine cries racism at every opportunity, once referring to respected Aboriginal figure and former NRL player and coach Arthur Beetson as an “Uncle Tom” (a black man considered to be excessively obedient or servile to whites) who went along with prevalent racism within the NRL. In late 2012, Mundine questioned former opponent Daniel Geale’s Indigenous Tasmanian heritage, saying he should not wear the Australian Aboriginal flag on his shorts. “I thought they wiped all the Aborigines from Tasmania out. He’s got a white woman, he’s got white kids. I keep it real, all day every day,” Mundine said. He has also claimed that Australia is one of “the most racist nations in the world” and has called for the Australian anthem and Australian flag to be changed to be more inclusive of Indigenous Australians.

The so-called “invasion’” of Australia happened many years ago, and just like slavery in the United States, there is no longer any person alive in this country who experienced the events firsthand.

To say that Jeff Horn has only achieved what he has due to his “white privilege,” Mundine has once more divided people. And when so many young Indigenous Australians look up to him, it will only lead to yet another generation of people believing that “the white man is keeping them down,” when it is simply not the case at all.

So it would seem, at least to me, that the opposite of what Mundine claims is happening.

Mundine’s comments are deliberately inciting. His career and popularity are on a decline, and a new generation of stars of the boxing and NRL worlds are coming into being. I understand the nature of the sports fighting world, and the need to “hype up” a fight, but to resort to the low act of using racially charged insults benefits nobody in the long run, and only serves to incite further hatred and division among Australians.