Stop Lying and Eat Your Salad 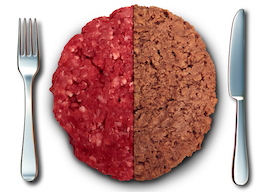 HOUSTON—If it doesn’t come from an animal—or, I guess, if you wanna get technical and include Soylent Green in our definition, an animal or a human—then it’s not meat.

I’m surprised I have to explain this.

There’s no such thing as “plant-based” meat.

As of Jan. 1, the state of Missouri has decreed that anyone selling a product called “meat” that is not, in fact, meat has violated the laws against misleading labeling and is therefore subject to criminal sanctions. A lot of vegans are unhappy.

But why is this controversial at all?

All right, normally I don’t like the government getting down into the nitty-gritty of commerce like that, but when you have 17 jillion companies out there splashing pictures of laboratory food all over the internet but calling it “meatballs,” you’ve got a problem beyond putting the word “champagne” on some kind of fizzy concoction from upstate New York. At least the guys in Buffalo are trying to use the same ingredients they use in Champagne. In the case of the makers of fake sausage, steaks, burgers, and tacos, they go to elaborate lengths to make it look exactly like a sausage, steak, burger, or taco when all they would have to do is invent a nonsense word like “tofurkey” and everyone would be fine with it.

Why does it matter? Because the taste of Texas, Nebraska, and Missouri steak has been created by two centuries of breeding, crossbreeding, mixing purebred herds with commercial herds, experimenting with feed and grazing land, the reseeding of pastures, and veterinary care that results in the marbling effect and the tenderness and the texture that creates a Yummy Response.

But do those cowboys get credit? They do not. They are reviled as purveyors of poison.

There was a time, thirty years ago, when it seemed like the greatest enemy of the cattle industry was McDonald’s. McDonald’s bought some ranchland in the Panhandle of Texas and started experimenting with lean breeds that would presumably result in the “100 percent hamburger cow.” They were unsuccessful, partly because a beef cow can’t be 100 percent anything—there are too many layers and cuts, even in a free-range longhorn steer from the 19th century that’s never been crossbred with anything.

“There’s no such thing as ‘plant-based’ meat.”

Then the War on Meat took a strange turn when Bess Myerson, the Consumer Affairs Commissioner of New York City, issued some kind of official proclamation warning the public about beef and calling for a boycott. The governors of Wyoming, Montana, Texas, Colorado, Kansas, and Nebraska paid a visit to the Big Apple to ask the assembled politicians of the East Coast whether they would like to see a boycott of New York tourism in return, since the whole thing seemed gratuitous and Big Brotherish. You don’t have to be a hardcore libertarian to have problems with the government dictating what you eat.

But here’s my question. Why do the companies that sell “not meat”—Frankenfoods made from plant cells and/or vegetable cocktails—spend millions of dollars to make it look exactly like meat? Wouldn’t that be a contradiction in vegetarian philosophy? “I’ve decided to chew leaves the rest of my life, but I want all the leaves to look like hot dogs.”

For example, the product called “Beyond Meat Beyond Sausage.” I don’t know what’s in it—they seem remarkably shy about printing their ingredients—but it looks exactly like a bratwurst or a Jimmy Dean pork sausage, and it’s sold in one of those soft plastic cartons with the cellophane pulled across the top that they use in grocery-store refrigeration cases. The purpose of the plastic cartons is to soak up the residual blood so it doesn’t drip, but in this case there is no blood but they want you to believe there is. Is that twisted or what?

With a company like Memphis Meats, on the other hand, there’s a valid argument for claiming the word, simply because the cells they use do come from animals. I would kind of like to know which breed the cow or pig is and where it came from, but I don’t dispute that a single cell of meat that ends up being cloned into a TV dinner is in the meat family. Whether it’s actual meat is another thing. The traditional use of the word means you’re eating something that used to be alive, and in that case Memphis Meats doesn’t qualify. Memphis Meats gives me the willies, to tell you the truth, because their philosophy—“Better Meat, Better World”—sounds like the opening of a 1980s Roger Corman sci-fi movie in which the whole cast gets consumed by replicating mutant genes.

“At Memphis Meats,” their website proudly claims, “our mission is to bring delicious and healthy meat to your table by harvesting it from cells instead of animals.”

Or as they say in Motel Hell, “It Takes All Kinds of Critters to Make Farmer Vincent’s Fritters.” And we know how that story turns out.

The other odd factoid about the meat-labeling controversy is that the vegetarians and vegans are all in favor of the manipulation of cellular food forms when it means turning a broccoli stalk into a fake cheeseburger, whereas genetically modified foods of any other type are by definition demonic poisons created by the agribusiness conspiracy. In other words, there’s a basic Pavlovian need to visualize a cheeseburger before consuming a not-cheeseburger.

This means they’ll do anything to avoid simply putting together a bunch of plants and vegetables in a healthy stew/salad/whatever and labeling it as “Healthy Stew/Salad/Whatever.” They want you to think it’s meat. The vegetarians want to consume it as a meat. You don’t need to go to those lengths, though, because we already have a food group that satisfies that need. It’s called, uh, meat.