Stop Screaming and Do Something! 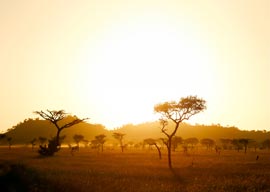 In the face of global hysteria bordering on madness I have to take a deep breath and grit my teeth to humbly offer a few temperate words. I write not in defense of Walter Palmer, Theo Bronkhorst, or Honest Ndlovu (who now need no introduction) but because I care about wildlife and”unlike the chattering masses”I know Africa, and I know the repercussions will do more harm than good to African wildlife.

I have no qualms about revealing the fact that I was once a professional hunter (not a very good one, so I spent a lot of time in the hospital). I speak for myself and can state unequivocally that I spent as much time protecting as I did hunting. My great friend Andre De Kok was gunned down and killed in an encounter with poachers. Others have been wounded, and a lot of us have come under hostile fire at some time.

“If hurling abuse and death threats at Bronkhorst and Palmer provided a solution, I”d be at the head of the queue with my skinning knife.”

I would ask all those millions spitting vitriol and venom to take note of the undeniable fact that at the same time “Cecil” was hunted and killed, thousands of other wild animals across sub-Saharan Africa were writhing in excruciating pain as they died slow, unheralded deaths in wire snares. Many others were walking wounded, having been shot with light-caliber weapons, homemade shotguns, and poisoned arrows. Africa is a lawless continent, and only a small portion of the remaining wildlife are policed with significant rigor. The rest are open to illegal hunting. Thousands of Africans kill far more prolifically and cruelly than Dr. Palmer every single day of the year. But the problem for the moronic multitude is that these crimes against nature don”t fit the beloved narrative; they are not wealthy Americans or portly Afrikaners with beer bellies, so they are excused. And because their conduct is so quickly forgiven by the media and its followers, there is little or no hope for wildlife in Africa. Believe me, if hurling abuse and death threats at Bronkhorst and Palmer provided a solution, I”d be at the head of the queue with my skinning knife. But it does not. In fact, it will exacerbate a bad situation.

The reason has been touched on above. Most parks and game areas are poorly protected. Africa, I”m sorry to report, is the home of hopeless governance and rampant corruption. Many wildlife areas are not suitable for photographic tourism. There are a variety of reasons, including security; some areas are within or on the fringes of conflict areas. Some do not have the volume of game or species variety to make them attractive to conventional tourists, and some are simply too difficult and expensive to access. It is these places that in most cases have no protection. The only people prepared to fill that void are the professional safari hunters. They in turn are the only people likely to provide the game any protection. In my experience, most professional hunters care deeply about the game they hunt. Even if they don”t, they have a vested commercial interest in protecting wildlife. The only way they can remain viable and engage in the prevention of uncontrolled hunting is if people like Dr. Palmer go hunting and pay the big prices big-game hunting demands. On the back of the “Cecil” debacle, the future of professional hunting is bleak. So too is the future of wildlife.